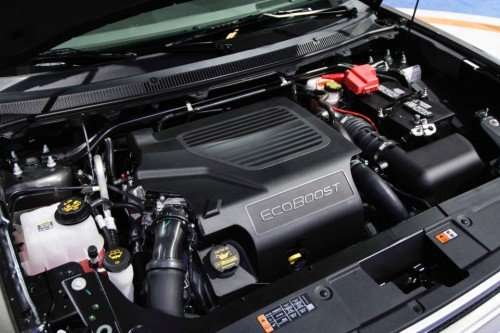 During a technology forum held on Google+ Hangouts, Ford highlighted the new Auto Start-Stop option that will be available on the 2013 Fusion, along with specifics about the technology and a recent survey commissioned by Ford regarding energy savings and fuel efficiency. The results may surprise some eco-enthusiasts.
Advertisement

One of Ford's best-selling models is the Fusion mid-sized sedan. The outgoing 2012 model is sold with a couple of engine options as well as a hybrid. For 2013, the Fusion will have five powertrain options, including two EcoBoost engines, a Hybrid, and two standard (naturally aspirated) engines. One option it will also include will be the inclusion of Ford's new Auto Stop-Start technology.

The 2013 Fusion with the 1.6-liter EcoBoost engine option will also offer Auto Stop-Start for only $295 more. With or without this addition, the mid-sized sedan with that engine will achieve 37 miles per gallon (estimated) on the highway - numbers as good as the competing Toyota Camry Hybrid, which sells for a higher hybrid premium.

Auto Stop-Start is a new Ford technology that works in a way similar to the stop-start systems other manufacturers are rolling out. Usually a standard feature on hybrid-electrics, it is also often seen on luxury vehicles as well. Simply put, when the car is stopped at a light, stop sign, or parked and waiting, the engine will shut off automatically and then restart automatically in order to save fuel. Ford's system has a half second delay between coming to a full stop (with foot on the brake) and engine shut off and about a quarter second delay to restart - less than the time it takes to move your foot from the brake to the accelerator. For those who've experienced this technology in Ford or other vehicles, it's seamless to the driver and becomes immediately intuitive when thinking about fuel economy and savings.

Ford's Lew Echlin, marketing manager for Ford Global Cars, pointed out that 1.9 billion gallons of fuel is wasted annually at vehicle stops and the average commuter spends 15-20 minutes daily at stop signs and lights. With Auto Stop-Start, that fuel is saved and Chuck Gray, chief engineer of Ford Global Core Engineering for Hybrid and Electric Vehicles, says that with Auto Stop-Start, a car achieves about a third of the savings a full hybrid offers. All at a much lower price point and with a faster return on investment time.

For comparison, the 2013 Fusion EcoBoost 1.6L with Auto Stop-Start saves the average driver about $15-$25 per month in gasoline (assuming $3.76/gallon) and the $296 premium paid for the stop-start means ROI in about 18 months. The Fusion Hybrid, however, requires almost four years to achieve ROI. So while the hybrid is a great option, it's not an option for everyone and Ford understands that.

Survey Says
Some of the most surprising revelations during the technology forum were from the survey Ford commissioned to find out what consumers are thinking (and doing) when looking to save energy. Some might find it surprising that the top reason cited for "going green" had little to do with esoteric aspirations ("saving the earth," "helping the planet," "cleaning the air") and a lot more to do with bottom line dollars saved.

An overwhelming 7 out of 10 respondents to the survey of more than 15,000 Americans said that eco-friendly cars were a consideration as a money saving option. When asked about various ways they could save money through new purchases, including household appliances, more eco-conscious products, etc., most respondents labeled a car purchase as their top priority for impacting their bottom line through economy.

"Consumers are amazingly practical," said Echlin. "Eight-two percent of those surveyed said that they agree or strongly agree that they would invest up-front in tech that helped them save money on gas."

Where Auto Stop-Start Goes From Here
The Fusion is one of Ford's best-selling models and will be the first high-volume vehicle that Ford has put Auto Stop-Start into. They expect to see a lot of market feedback from this. While they do not expect that there will be maintenance or reliability issues with the new technology, which has been vetted in Europe for nearly a decade, they do want consumer feedback in terms of sales figures and comments.

From there, Ford's Lew Echlin says, they'll begin rolling Auto Stop-Start out into other platforms quickly and expect it to be a standard feature akin to cruise control and air conditioning in the next decade.