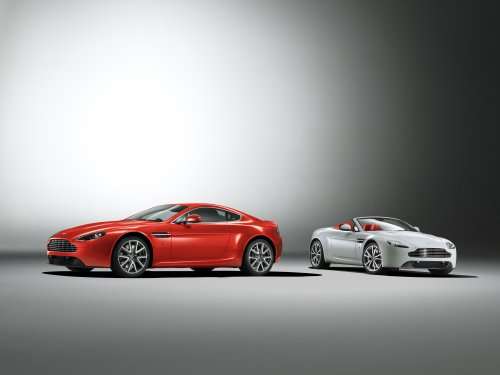 When it comes to exclusive sports cars, no name is more well-loved than Aston Martin. A new lineup of Vantage models is headed for American shores for 2012 and we've got a sneak peek for you!
Advertisement

The new Vantage Range for 2012 include some styling changes, a new transmission, better breaking, sharper aerodynamics, and pricing starting at just over a hundred thousand.

In the genre of high-end sports cars, expectations are high. Some prefer the rugged, street-savvy looks of the McLaren MP4-12C while others prefer the more speedster-focused design of the Bugatti Veyron Vitesse. Nearly everyone, though, loves the beautiful, timeless design and driveable handling of an Aston Martin.

At the top of many's Aston Martin list of models they'd like to own is the Vantage. For 2012, the company has made some changes and excellent upgrades to put this current classic on the top shelf where it belongs. The V8 Vantage lineup includes the Coupe and the Roadster versions, each being basically the same except for the convertible that makes the Roadster what it is.

The new entry-level engine is a 420bhp 8-cylinder engine with 346 foot pounds of torque - the same engine seen in the acclaimed Vantage S. The standard transmission is in 6-speed, as before, but now a new, optional 7-speed Sportshift II automated manual transmission is available, replacing the earlier 6-speed Sportshift. The additional gear gives closer ratios and better shift quality to optimize acceleration. The transmission was designed and is being built specifically for Aston Martin. Top speed for the U.S. specification is 180 miles per hour. Fuel consumption depends on transmission choice, but is a combined 16-17mpg average.

The chassis of the Vantage has been refined to match those shown in the Vantage S. The steering column has been re-designed and fitted with a power-steering pump with a quicker ratio (15:1 compared to 17:1), which translates to faster responses in steering and better feedback to the wheel. Larger brakes include 380mm two-piece from discs and 6-piston calipers and the addition of Hill Start Assist for steep inclines. Tires are now 10mm wider than previous models, giving much more prodigious road-holding and better braking.

Styling changes, though, are what Aston Martin enthusiasts will notice first. Taken from the Vantage S and the V12 Vantage, these new lines mean a more muscular, racy look for the car. This is especially apparent on the Roadster, whose lack of a roof emphasizes the new style's wider grille and more powerful-appearing rear-end thanks to the sculpted diffuser.

The lower bumper at the front has an aerodynamic splitter and a larger air intake area to feed the engine and heavier brakes. Side sills are race-derived and emphasize the heavier musculature of the car while the rear diffuser heightens the clipped tail, already heavy thanks to the rear wheels being pushed almost to the end.

Overall, the new look means a sleeker, stronger-looking car design with a refined, but credible look that really brings out the best in Aston Martin's moniker.