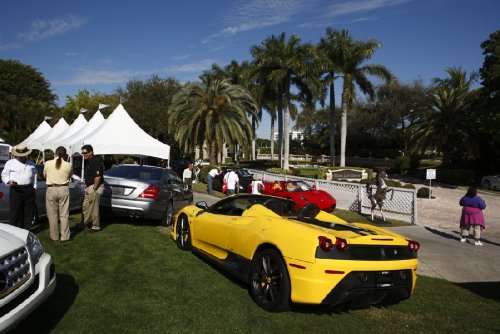 The 6th annual Boca Raton Concours d' Elegance took place February 24-26, 2012 and showcased some of the most exclusive and beautiful of vehicles, along with auctions for the same. See on-site footage of some of the hottest cars on display during this year's show.
Advertisement

From classic to modern, the Concours d' Elegance features some of the most exclusive cars ever made. The 2012 show was one of the best yet, featuring many awesome vehicles - most being displayed by proud owners, hoping to win ribbons in show events, and some being offered up for auction.

Thanks to Boca Raton resident and friend Craig Agranoff, Torque News has received exclusive footage of some of the modern showcase picks at this year's Concours.

The Lexus LS600h is the line's most exclusive of vehicles, selling for over $120,000, and featuring reclining rear seating as well as some of the most plush and modern of in-car conveniences. All while featuring the latest in Toyota-Lexus hybrid drive trains. Debuting in 2007, the high-end hybrid is equipped with full-time all-wheel-drive (AWD) and power equivalent to most 12-cylinder luxury engines in a 5.0-liter V8 package while emitting 70% fewer emissions than its cleanest competitor. Here's a quick video view of the LS600h at Boca:

The McLaren MP4-12C is a muscle car that for many defines supercar performance. With industry-leading design, the MP4-12C is a mid-engine GT with the lowest emissions and highest efficiency in its class. It's the latest in McLaren's lineup of top-end sports cars. Here are two examples from the Concours d' Elegance:

Of course, Aston Martin, not to be outdone, had two great showcases at this year's show. The Aston Martin Rapide is a beautiful example of how this company can create both breathtaking design and seat-gripping performance in one package. In a four-door coupe style, the Rapide is made of aluminum and composites, making it light weight for its size. It's all-alloy V-12 engine couples with a rear-mounted 6-speed gearbox to give a 0-62mph (0-100km/h) acceleration of 5 seconds. Yet this performance coupe is full of style and luxury, belying its muscular nature. Here's the beautiful Rapide at the show:

Next, the automaker showed the award-winning Aston Martin DBR9 racer, which first debuted in 2005 and has since undergone various refinements to this latest model. Based on the DB9 road car, the DBR9 is all about racing, being fitted explicitly for 24 Hours of Le Mans and similar events. With the exception of the roof, the car is entirely made up of carbon-fiber body panels. The car being shown at Boca Raton is the American racer for events in North America, AM #88. In the background, you'll hear the auctioneer introducing a 1954 Aston Martin DB:

Finally, the Alfa Romeo 8C Competizione was introduced as a concept in 2003. It went into production in 2007 with a price tag of over $200,000USD. It was then offered as a convertible with the Spider title in 2009. The unique, undeniably beautiful 8C Competizione was produced in very limited quantities. Its exclusivity only adds to its allure. The 8C refers to the car's 4.7-liter 8-cylinder engine, a powerhouse born in Alfa's racing pedigree. A show-stopping car wherever it goes, it's a fitting capper to our tour of this year's Boca Raton Concourse d' Elegance: