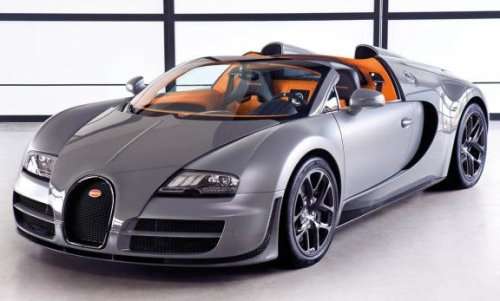 The 1,200 hp Bugatti Veyron Vitesse is the fastest roadster ever

The incredible 1,200 horsepower Bugatti Veyron Grand Sport Vitesse made its debut last week at the 2012 Geneva Motor Show and the legendary hypercar builder has now unveiled all of the details on what they claim is the fastest roadster ever built in the world – with a top speed of 255 miles per hour.
Advertisement

In theory, the Bugatti Veyron Grand Sport Vitesse is created from a fairly simple equation – take the open-aired chassis of the 1,001 horsepower Bugatti Veyron Grand Sport and insert the 1,200 horsepower engine from the Bugatti Veyron Super Sport to create the world’s fastest roadster ever. The problem is that with an engine capable of propelling the hefty Veyron Super Sport to over 267 miles per hour, there is a serious concern with ensuring that the car is aerodynamically flawless in order to prevent the car from becoming an airplane at 250+ miles per hour. Luckily, this is what the engineers at Bugatti do every day so they took to task, installing the 1,200 horsepower W16 engine from the record-setting Super Sport into the Grand Sport to create the Vitesse.

"We were instantly electrified by the idea of transferring the power of the Super Sport to the Grand Sport, which previously delivered a maximum of 1,001 hp, and thus taking the roadster to a new level," says Wolfgang Dürheimer. The President of Bugatti Automobiles S.A.S. continues: "Our team has managed to transfer the world's most powerful car engine to the open-top sports car while taking all vehicle dynamics and aerodynamic parameters into consideration. We are proud to present the fastest roadster ever at the Geneva Motor Show with the world premiere of the 1.200 hp Grand Sport Vitesse."

The modifications to the standard Veyron Grand Sport to create the 1,200hp Vitesse begin with a strengthening of the chassis, revised suspension and an enhanced brake system cooling setup. Across the front end, the Vitesse wears a new front fascia with enlarged intake openings for the engine intercoolers and a larger front splitter helps to add downforce at high speeds. Out back, the Grand Sport Vitesse wears a similar dual diffuser along the bottom flanking the central dual exhaust system.

When the Bugatti Veyron Grand Sport Vitesse was first teased, we speculated as to just how fast the 1,200 Vitesse would be; considering that this same engine allowed the Veyron Super Sport to set the current production road car top speed record at 267.857 mph. The aerodynamic properties of the Grand Sport are seemingly somewhat of a hindrance to the 1,200 horsepower drivetrain, as Bugatti has stated that the top speed of the Vitesse is 255 miles per hour in Bugatti’s special Top Speed mode using the special high speed key system (the Veyron actually requires a different key to access the Top Speed mode). In normal mode, the Veyron Grand Sport Vitesse is still capable of hitting 233 miles per hour so even without the special key, most drivers will be able to keep up with traffic…air traffic, that is.

In addition to claiming the title as the world’s fastest roadster ever, the Bugatti Veyron Grand Sport Vitesse will also hold its own in a stop-light dash with the ability to hit 62 miles per hour from a stop in just 2.6 seconds. Like all Bugatti supercars, the interior is a perfect marriage of high end luxury finishes in a cockpit style layout that is designed from a history of race cars – as being the fastest roadster in the world is nothing if the driver and passenger aren’t living in the lap of luxury while going 255 miles per hour.

Here is the bad news…the Bugatti Veyron Grand Sport Vitesse as presented at the 2012 Geneva Motor Show comes in two different finishes with a price ranging from $2.28 million USD to $2.5 million USD. The Vitesse was shown in one layout featuring a two-tone blue finish which carries a price of $2.5 million while the “Jet Grey” finish (shown on the right) featuring contrasting matte and gloss versions of the same color is a mere $2.28 million. With prices like this, we aren’t likely to see the Vitesse at the local car cruise but in introducing the fastest roadster in the history of the automotive industry – Bugatti has continued to secure their place in the automotive record books while also continuing to raise the bar for everyone else.