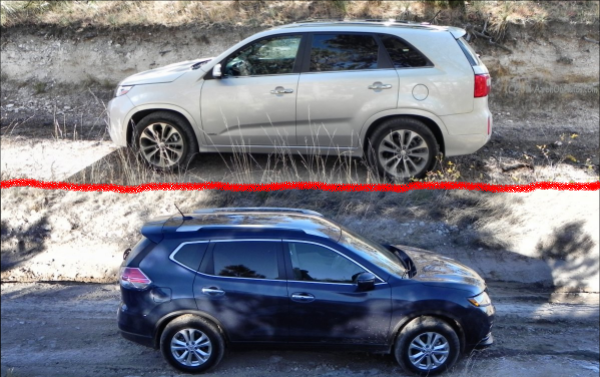 Most people shopping in the small to midsize crossover category will likely cross-shop these two closely.
Advertisement

The Kia Sorento is the company’s flagship crossover and the Nissan Rogue is that company’s best-selling crossover. The two are comparable on several fronts, selling at similar price points to similar demographics and with similar capabilities. Most people shopping in the small to midsize crossover category will likely cross-shop these two closely.

Today, we will compare the two on a few key points that are some of the most important motivators for purchase in the small-to-midsize crossover category. We’ll do our best to be as apples-to-apples as possible, comparing 2015 model year vehicles at trim points that are roughly equal in terms of MSRP and fitment. As with all automotive, some points are subjective and some comparisons will be less important to some buyers than they will be to others.

Powertrain and Fuel Economy
Here, an apples-to-apples comparison is not as simple as we might hope. The Rogue is offered only with a four-cylinder engine and continuously variable transmission (CVT). The Sorento has both a similar-sized four-cylinder and a more powerful V6. For our comparison, we’ve matched the four-cylinder engines, but will include some notes about the Sorento’s V6 because it’s the more popular engine choice for that crossover - and with good reason, as we’ll see.

The 2015 Sorento is offered in its base configurations with a 2.4-liter engine that produces 191 horsepower. Nearly all reviews of the crossover agree that this engine is both under-powered for the size of the Kia and offers little in the way of fuel economy benefits in return. At only 29 mpg on the highway (23 mpg combined) in its front-wheel drive configuration, this engine is less than expected.

The Nissan Rogue, on the other hand, is offered with a 2.5-liter inline-four that produces 170 horsepower and, more importantly, 175 pound-feet of torque through a CVT. It receives good reviews from most automotive journalists for its capability and fuel economy. The EPA rates it at 28 mpg combined whether front-wheel or all-wheel drive is employed.

The Sorento’s V6 engine is a more capable and realistic 290 horsepower returning 25 mpg on the highway (23 mpg combined).

On the straight numbers, the Nissan wins out with the Rogue’s superior MPG ratings. Some may note, however, that the Sorento is a larger vehicle and also that the returns of the V6’s much higher power output may be more important to them. We agree. So we’re considering this comparison a win for the Rogue in pure fuel economy and a win for the Sorento in engine versatility.

Interior Comfort, Fit and Finish
This metric is far more subjective, but not a tough choice to make in the end. We’re giving the win to the Nissan Rogue with a nod towards the Sorento for its close second. The Rogue offers some of the most comfortable seating you’ll ever try and has high-quality finish throughout the cabin. The Sorento, on the other hand, also offers high quality in its mid- and upper trim levels as well as smart fit and finish. The Rogue’s chief winning point is the fact that even in the base model, interior fit and comfort are superb when compared to any other vehicle in the segment. This is no knock against the Sorento, which is better than most, but more a testament to the improvements Nissan has made with the current-generation Rogue.

Daily Use Ergonomics, Family Friendliness
On this point, we’re calling it a draw. Comparing the Sorento and Rogue in a three-row apple barrel, we see strengths and weaknesses in each. The Sorento is larger and roomier inside with good access to the third row and an easy seat folding system for cargo utilization. The Rogue, however, has a more comfortable cabin with a more ergonomic layout for ease of access at all points.

Road Presence and Safety
On the road, the larger Kia has the advantage of a more commanding presence and higher seating position. It’s also quieter in the cabin and more adjustable in ride dynamic than is the Rogue. The Nissan, however, offers superior seating, more nimble steering, and a smarter response from its four-cylinder. Both are very comfortable on the highway as well as around town. Which you choose in this regard will depend largely on your intended use of the vehicle.

In terms of safety, however, the Nissan Rogue wins hands down. It is both an Insurance Institute for Highway Safety Top Safety Pick and a 4- and 5-star achiever in the National Highway Traffic Safety Administration’s tests. The Kia, on the other hand, received a Poor rating on the IIHS’ small-overlap front test, but did get an overall 5-star rating from the NHTSA.

Conclusions
The Kia Sorento is a great crossover offering a lot of benefits to the small-midsize vehicle buyer. Our chief complaints are small, when all is said and done, with the exception of its low crash test returns from the IIHS. The Nissan Rogue, on the other hand, is a smaller crossover that offers a lot of comfort, fuel economy, and high safety ratings. It is, however, not as refined on the highway and has less interior to work with overall.

Most buyers will make choices based on their need. We’d recommend the Sorento for those who need a larger interior and aren’t as concerned about fuel economy as they are with space and ride quality. On the other hand, for those who value fuel economy and don’t need the extra few cubic feet of space, the Rogue is an excellent choice.

AR wrote on May 16, 2015 - 8:15am Permalink
5/16/2015 Straightforward insightful review; however, wouldn't it be more helpful if the comparison used the redesigned 2016 KIA Sorento at this date and time since the 2016 KIA is now available. Apples to Apples, it would seem fairer to compare the redesigned 2015 Rogue to the redesigned 2016 Sorento.
Aaron Turpen wrote on May 16, 2015 - 4:56pm Permalink
No it wouldn't as they're differing model years. Neither the Rogue nor the 2015 Sorento were updated in the 2015 model year, thus they are exceedingly comparable. The Rogue was redesigned in 2013, not 2015. You're probably thinking of the Murano.