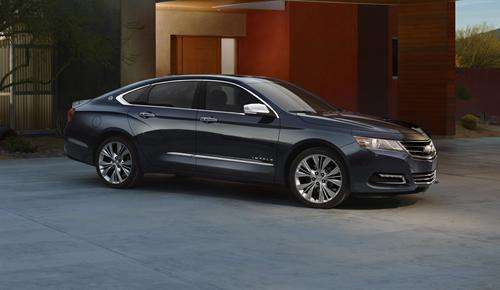 The all-new 2014 Chevrolet Impala began driving off the line in Ontario today and will begin entering showrooms later this month. Production at General Motors' Detroit-Hammtrack Assembly Plant begins in May.

The 2014 Impala features several new premium options such as Adaptive Cruise Control and crash-avoidance technologies like Rear Cross Traffic Alert and Side Blind Zone Alert. It also contains ten standard airbags, the most in the segment. The new, next-generation MyLink radio system also debuts in the 2014 Chevrolet Impala.

For the 2014 model year, the Impala has three engine options. A 3.6-liter V6 is the largest of the options while two four-cyilnder engines make up the base and fuel efficient powertrains. A 2.5-liter 4-cylinder is the base option and a 2.4-liter with fuel-saving eAssist will bring up to 35 mpg highway for the 2014 Impala. All engines match to a 6-speed automatic transmission.

“The all-new Impala demonstrates the new direction of Chevrolet,” said Kevin Williams, president and managing director of GM Canada. “Our employees in Oshawa have executed a flawless plan in bringing this iconic nameplate to life. The newly redesigned Impala will exceed customers’ expectations because of the hard work of our employees at Oshawa Assembly.”

The 2014 Impala is the tenth-generation of the Impala model, was introduced in 1958, and is one of the oldest model lines still in production today. It's new design features sleeker styling, a more modern, refined and premium look, and class-leading interior refinements. This generation Impala is larger as well, making it one of the roomiest in the full-sized sedan segment.

The 2014 Chevrolet Impala starts at $27,535, including destination. The Oshawa, Ontario plant also builds the Camaro, Buick Regal and Cadillac XTS.