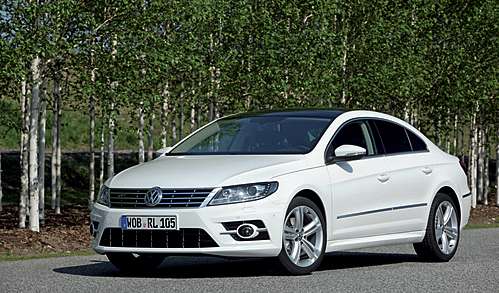 Volkswagen will unveil the R-Line version of the CC at the Auto Mobil International show in Leipzig on June 1 with U.S. availability coming in late 2012.
Advertisement

This CC model will be available in the U.S. at the end of 2012 with the 200-horsepower, 2.0-liter, turbocharged TSI engine, mated to either a six-speed manual or a six-speed dual-clutch automatic transmission. But it's not the horsepower that sets the CC R-Line apart from the standard CC because they both have the same ratings.

Compared with the Sport model, the R-Line gains a more aggressive front bumper design that incorporates a large lower air intake and projector-style foglights with a striking chrome motif. Side skirts and the R-Line logo on the grille further differentiate it from the Sport model, along with shaded taillights and unique and dramatic 18-inch aluminum-alloy wheels.

Interior enhancements include stainless-steel R-Line scuff plates and the multifunction steering wheel for the DSG-equipped model has paddle shifters.

However, most of this appears to already be available on the 2013 Volkswagen CC models now available in the U.S. The R-Line improvements are little more than cosmetic because VW at this point hasn't revealed any enhanced performance statistics. If any are available, look for that information to come from the Leipzig show later this week.

The CC was refreshed for the 2013 model year, featuring new front and rear styling and an extended range of standard equipment. The 2013 CC went on sale in March and now has seating for five (previous models seated four). The new CC makes an even bolder move towards the automotive luxury class, offering a sleek, dramatic look at a highly attainable price.

The CC is an interesting vehicle. It was the first affordable four-door coupe when it was introduced four years ago. As VW points out, since then 270,000 have been sold by various manufacturers. It's a look that some lament because they consider the four-door coupe to be an abomination that's all about design and not functionality for the rear-seat passengers. After all, what's the point of a sedan if it can't comfortably seat passengers larger than middle school kids?

TorqueMonster wrote on July 9, 2012 - 7:09am Permalink
If they put a TDI motor in the CC I would buy one in a heartbeat.