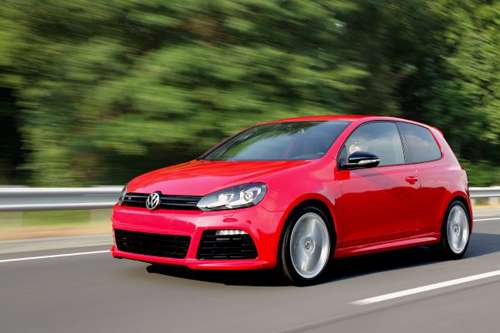 The 2012 Volkswagen Golf R is inspired by the 2004 and 2008 Golf R32 models, which seems to indicate that sporty Volkswagens are timed to the U.S. presidential election cycle. Regardless of timing, the Golf R packs a wallop at 256 horsepower from a turbocharged 2.0-liter TSI engine.

That makes the 2012 model more powerful by 6 horsepower but from a much smaller engine. The R32 models used 3.2-liter VR6 engines. The smaller engine is going to give the Golf R predicted fuel economy of 19-mpg city and 27-mpg highway from the engine that is mated to a close-ratio six-speed manual transmission.

The car uses an updated version of the EA113 2.0-liter turbocharged inline four-cylinder engine, rather than the EA888 engine used in the current GTI. Like the EA888, the EA113 uses direct fuel injection and double overhead camshafts with variable intake timing. Because the Golf R develops more power and torque than the GTI—256 horsepower and 243 lb-ft compared with 200 hp and 207 lb-ft—a number of changes have been made. The cylinder block is reinforced, stronger connecting rods are fitted, and a BorgWarner K04 turbocharger is used, boosting at up to 17 psi.

Like the previous R32 models, the Golf R is equipped with Volkswagen’s 4Motion all-wheel-drive system: the latest generation of this system can divert up to 100 percent of the torque to the rear wheels, if needed. All Golf R models sold in the U.S will be equipped with a close-ratio six-speed manual transmission. For the first time, the Golf R will be available in two- and four-door guises as well as in two trim levels: well-equipped Golf R and luxurious Golf R with Sunroof and Navigation.

The changes made for the Golf R include a new bumper in the front that incorporates LED daytime running lights and three large black air intakes that help cool the engine. The radiator grille is finished in gloss black and features an “R” logo that sets the front of the car apart from the rest of the Golf range. Unique Bi-Xenon headlamps that are framed in black also have the Adaptive Front-lighting System (AFS), where the lights turn with the steering wheel, up to a maximum of 15 degrees, to provide better visibility around bends.

There’s further differentiation at the back of the R, where a new rear bumper was needed to accommodate the central twin pipes for the exhaust system, similar to the tailpipes fitted on the original 2004 R32. The bumper also features a gloss-black diffuser. The back end is highlighted by a slightly larger tail spoiler than that of the GTI and a subtle “R” badge. The R is available in five colors: Rising Blue, Candy White, Carbon Steel Gray, Black, and Tornado Red.

The wheels for the 2012 Golf R get a distinctive look. The new 18-inch aluminum-alloy wheels expose gloss-black-painted brake calipers that incorporate the “R” logo.

The Golf R has unique calibration for its suspension, even compared with the GTI. At the front, it uses a damper-strut layout with lower control arms and a stiff, tubular anti-roll bar that combine to help keep the front tires planted during hard cornering, reducing body roll and heightening steering feedback.

At the back, there’s a compact multilink independent layout that features coil springs, telescopic dampers, and an anti-roll bar. The four-link layout features three lateral control arms—the spring mounting, the track rod and upper control arm, and a trailing link at each wheel.

Volkswagen's exterior subtlety on the 2012 Golf R kind of disappears when you step inside the vehicle. There are aluminum "R" kickplates. The leather bucket seats have an "R" logo on the head restraint. Other R-specific features include: blue pointers for the instruments; the shifter knob with an “R” motif; aluminum trim for the dashboard and doors; and aluminum pedals.

Tsingshan's Threat to Tesla: EV Maker Is In Battery Crosshairs
Tesla-Funded Research Reveals One of The Biggest Mysteries of EV Battery
END_OF_DOCUMENT_TOKEN_TO_BE_REPLACED