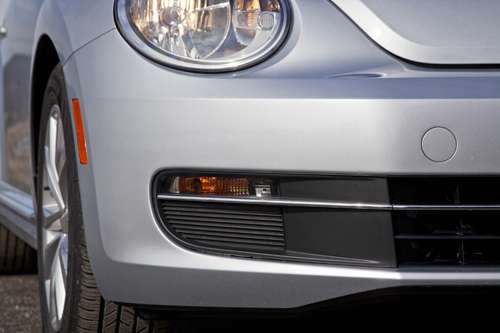 Volkswagen's march to world dominance may just come on the back of diesel models like the VW Beetle TDI Clean Diesel coupe that has a starting price of $23,295.
Advertisement

This will be the sixth TDI Clean Diesel model available in the U.S. when it goes on sale in August. The other models are the: Golf TDI, Passat TDI, Jetta SportWagen TDI, Touareg TDI and Jetta TDI.

The Beetle TDI is the third model in the Beetle lineup and joins the 2.5-liter five-cylinder and 2.0-liter turbocharged gasoline models, which launched in 2011 as replacements for the awkwardly named New Beetle. The Beetle TDI features VW’s 2.0-liter turbocharged, direct-injection Clean Diesel engine that produces 140 horsepower and 236 pound-feet of torque. When equipped with a manual transmission, the model has manufacturer fuel economy estimates of 41 mpg highway and 32 mpg city.

Those fuel economy numbers are fairly fantastic when compared to the gasoline models. The 2.5-liter five-cylinder Beetle is rated at 22 mpg city and 31 mpg highway. The 2.0-liter turbo Beetle has an EPA rating of 21-mpg city and 30-mpg on the highway.

But (and isn't there always a but?) the diesel Beetle does have a starting price that is $4300 higher. Plus, diesel fuel has higher taxes thanks to low consumer use of diesel fuel until now. (Lawmakers foolishly believed only businesses pay diesel fuel taxes, conveniently forgetting that those costs are passed onto consumers.)

On the plus side, diesel engines do last a lot longer. A diesel Beetle could make sense if you plan to keep the car for years to come.

TDI
Manual $23,295
Automatic $24,395
The base TDI model comes standard with unique 17-inch aluminum-alloy wheels, all the equipment listed above, and an interior and exterior chrome package. The standard RCD310 audio system has an AM/FM radio, CD player, Bluetooth technology, SiriusXM Satellite Radio and eight speakers. (A limited subscription is most likely available on the SiriusXM radio before you have to pay.)

TDI with Sunroof, Sound, and Navigation
Manual $26,195
Automatic $27,295
In addition to the above features, the top model includes the RNS 315 navigation system and the award-winning Fender Premium Audio system.

All prices exclude a destination charge of $770.

danwat1234 wrote on June 13, 2012 - 12:53am Permalink
I'v never understood why their gas models suck so much gas. Why can't they get any better than a Civic Si? There is something wrong with their gasoline drivetrain or car body if that is the case. The beetle is not a large car.

Tsingshan's Threat to Tesla: EV Maker Is In Battery Crosshairs
Tesla-Funded Research Reveals One of The Biggest Mysteries of EV Battery
END_OF_DOCUMENT_TOKEN_TO_BE_REPLACED