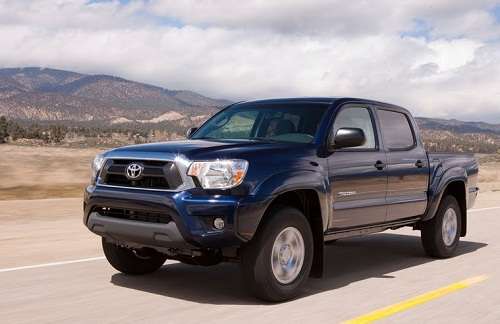 What do you do when fuel prices are stabilizing - if not falling a little bit - and you have the best selling compact pickup truck in America? If you're Toyota you raise the price of the 2012 Toyota Tacoma pickup truck just because you can.
Advertisement

The base Manufacturer's suggested retail price (MSRP) for the 2012 Tacoma will range from $16,875 for the Regular Cab 4x2 equipped with a 2.7-liter four-cylinder engine and five-speed manual transmission, to $27,835 for the Tacoma Double Cab 4x4 long bed with a 4.0-liter V6 and five-speed automatic, reflecting price increases ranging from $10 to $645. The MSRP for the 2012 Tacoma does not include the delivery, processing and handling (DPH) fee of $810. The DPH fee for vehicles distributed by Southeast Toyota (SET) and Gulf States Toyota (GST) may vary.

For the higher price, Toyota says the 2012 Tacoma gets a fresh face with a redesigned hood, grille, headlamps, upper and lower front bumper, fog lamps, headlamps and antenna. Expect a full product refresh to come in a couple of years as Toyota seeks to regain its position of world dominance and recovers from the earthquake and Tsunami in March 2011.

As Toyota says, the Tacoma is primarily a work truck, which is why Toyota is trumpeting things like new heavy-duty all-weather flooring and water-resistant seat covers. (Water-proof seat covers are called leather seats.) But that doesn’t mean Tacoma owners don’t want to have a little fun.

The 2012 Toyota Tacoma will be one of the first Toyota vehicles to offer the Entune multi-media system. The Toyota Entune system is a collection of popular mobile applications and data services, with three years of complimentary access. Once a smart phone is connected to the vehicle using Bluetooth wireless technology or a USB cable, Entune’s features are operated using the vehicle’s controls or, for some services, by voice recognition. Entune includes Bing and Pandora; real-time info including traffic, weather, fuel prices, sports and stocks. Apps available in spring 2012 at no cost.

2009 Owner wrote on October 25, 2011 - 7:59pm Permalink
I like the new interior as well as the new front end. I am really excited for Nav and the bluetooth audio, but I wish they had a leather interior.
2009 Owner wrote on October 25, 2011 - 8:00pm Permalink
I have a 2009 and I love the Tacoma. I think that the new bumper looks great, I like the nav/bluetooth audio options too, but I wish leather was an option.
Toyota Trucks A... wrote on January 6, 2012 - 10:54pm Permalink
You can now get a Single Cab 4x4 with an automatic. Makes a good fleet addition. I find the addition of what sounds like rubber floors for access and double cabs delightful. The interior looks better and the outside is growing on me. Still no love for the lack of 6-speed auto transmissions, and the manual 6 speed needs more ratio spread. Direct injection would be cool.

Tsingshan's Threat to Tesla: EV Maker Is In Battery Crosshairs
Tesla-Funded Research Reveals One of The Biggest Mysteries of EV Battery
END_OF_DOCUMENT_TOKEN_TO_BE_REPLACED