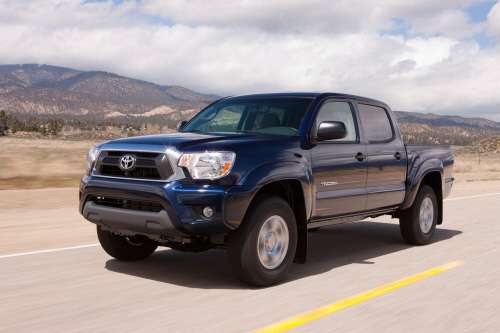 The wildly popular Toyota Tacoma made its debut today as a 2012 model. Even in a gasping economy, the Japanese juggernaut has traditionally been the best-selling compact pickup truck in America, blowing out its closest competitor on the showroom floor by a 2-to-1 margin with annual sales of more than 106,000 units.
Advertisement

The reason for the 2012 Toyota Tacoma's continued success with discerning buyers could be because it is offered in so many configurations and models and prices and has diverse and relevant standard equipment.

Unlike most of the 2012 Toyota lineup, whose prices came out last month, no MSRPs for 2012 Tacoma models were announced today. But 2011s have sold from somewhere between $17,000 and $28,000, depending on how they have been equipped.

Toyota continues an emphasis on customer choice with the 2012 Tacoma. The new truck has a new, more aggressive fascia and can be ready for the road with a 4- or 6-cylinder engine and with 2- and 4-wheel drive drivetrains.

All Access Cab and Double Cab models add as standard fare "active headrests" for the front seats. They move up and forward during a collision to keep your head safer.

There are a billion things that are new on the Tacoma for 2012. Let's look inside.
The 2012 Toyota Tacoma has a revised exterior and an upgraded interior to add comfort, functionality and what Toyota calls "audio / infotainment" performance.

The 2012 Tacoma (pictured) also offers new heavy-duty all-weather flooring on Access and Double Cab models. New on the TRD Sport Package are side mirrors with turn-signal lamps and chrome-clad 18-inch wheels as an option.

How good is this truck? The Tacoma was “Most Dependable Midsize Pickup” in the J.D. Power & Associates 2011 Vehicle Dependability Study and Intellichoice called it a “2011 Best Overall Value” in the compact pickup segment.