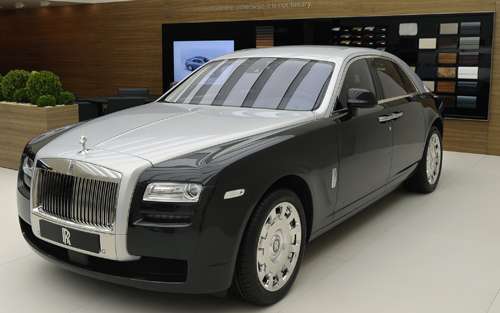 It's a bespoke option, which is how the 1 percent among us refer to customization. (In Los Angeles it might be called "pimping your ride" or something similar.) Rolls-Royce said in a news release the "Rolls-Royce Ghost has also been winning admirers in the company’s exclusive on-stand guest lounge. Clients, dealers and media guests have been delighted by the presentation of one of the first examples of a two-tone Rolls-Royce Ghost, a bespoke option offered for the first time this year, complementing the popularity of two-tone Phantom models."

Here's how the BMW subsidiary describes the two-tone Ghost, which has been dubbed The Geneva Ghost: "Finished in Infinity Black, with a Cassiopeia Silver upper two-tone, the Geneva Ghost features an interior design scheme that perfectly reflects the two-tone theme. Seashell headlining and sumptuous black leather frames black stained ash veneer into which steel pinstripes have been carefully crafted. The final luxury touch is lambswool floor mats into which feet are easily lost at the end of a hard day."

“Whether Ghost or Phantom, any Rolls-Royce is a work of art, taking its place in our clients’ luxury collections alongside yachts, helicopters and fine jewelry,” said Torsten Müller-Ötvös, CEO Rolls-Royce Motor Cars. “So I am delighted that we are now able to offer two-tone options for Ghost as well as for Phantom, features that once again extend the palette upon which a Rolls-Royce masterpiece can be painted.”

A second upper two-tone Rolls-Royce Ghost has recently been commissioned for delivery to a client based in the Middle East. This striking color scheme starts with Baynunah Brown, with Arizona Sunbathing the car’s bonnet, window surrounds, roof and luggage compartment. A gold-plated Spirit of Ecstasy and double coach-line in gold finish the design.

While incorporating classic Rolls-Royce design cues – the elevated prow, long bonnet, short front overhang, sharply raked A-pillar and elegant tail – Ghost exudes an informal aura. Contemporary touches include self-righting wheel centers and the Xenon headlamps that frame the latest evolution of the Rolls-Royce grille. Here the sides of the intake have been curved inwards and the vanes set back into the opening.

The new air suspension system in Ghost is so sensitive that it can detect even the smallest of changes. For example, it will sense the movement of a single rear passenger from one side of the seat to the other and compensate accordingly. A complex computer system reads multiple inputs from sensors around the car; the dampers alone make individual load calculations every 2.5 milliseconds. This ensures not only perfect comfort but also precise steering and dynamics for the driver.

The Ghost is not only pretty but it's quick. The ghost is powered by a brand new, 6.6 liter twin-turbo V12 engine, unique to the model. Featuring direct injection, it produces 563bhp – enough to propel Ghost from 0-60 mph in just 4.7 seconds* and on to an electronically governed top speed of 155mph.

Rolls-Royce Motor Cars celebrated a record sales result in 2011 with 3,538 models delivered to clients worldwide, beating the previous sales record held in 1978 when 3,347 units were sold, a period during which Rolls-Royce was under different ownership. 2011 also marked a record for the Rolls-Royce Bespoke personalization program, a service with Rolls-Royce’s legendary hand-craftsmanship and attention to detail at its core. Nearly every Phantom family model leaving the Home of Rolls-Royce at Goodwood came with some element of bespoke personalization, from unique paint colors, interior detailing and embroidery, to exquisite whole vehicle designs including champagne sets, humidors, and picnic sets.

For Some Former Daimler Managers Daimler Is Authority, While Tesla Is Like a Startup
How Daimler Unintentionally Subsidizes Tesla Giga Berlin
END_OF_DOCUMENT_TOKEN_TO_BE_REPLACED