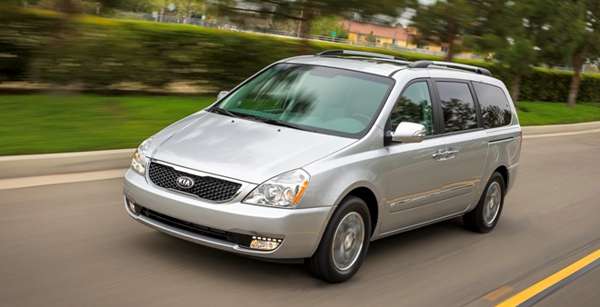 Kia had a great sales year in 2012 but its sales numbers are starting to show signs of weakness as 2013 comes to a close. There are some steps that need to be done in order for it to return to robustness in 2014.
Advertisement

Fix Your Designs
Kia has some beautifully designed cars and crossovers like the Kia Soul, the Kia Optima, the Kia Forte (a personal favorite of mine), and the Kia Cadenza that debuts in 2014. Actually, its whole lineup is visually stunning.

And that's the problem. Bear with me a minute on this one. Subaru for years made great cars and had decent sales. Then, a light off whenever a Japanese executive's head and he said, "Let's make our cars look like the rest of the market." Voila (or whatever the equivalent word is in Japanese) designs were softened and Subaru sales have taken off.

Why's that? No straight, meat-eating man wanted to be cut dead driving a Subaru. The brand had a strong identification with women and granola crunchers. (I know – the WRX-STI is all-man but it's always been the exception.) So Subaru dialed things back, while others were going futuristic, and came up with some real sales winners.

Of course, it is somewhat ironic that I suggest Kia take a play from the Subaru playbook. Subaru will crack 400,000 in sales for the first time ever this year, which is still 100,000 vehicles behind Kia. However, Subaru at this time feels more ascendant.

Sell Less Vehicles
Kia has eight models but they're broken down into various subsets so there are actually 12 and that could be hurting sales. Technically, the Kia Forte, Kia Forte5 and the Kia Forte Koop are all Fortes, but nobody really considers them the same car. Same with the Kia Rio and the Kia Rio5.

Here comes the hard part – what vehicles to pare from the lineup? Strictly based on sales numbers maybe it should be the Sedona and the Sportage. The Kia Sportage has seemingly become a mainstay of rental car fleets and that's never a good thing. I have strong opinions about the Sedona below so I won't go into that here.

Can the Kia Minivan
Kia is introducing a new minivan in 2014. Why? It doesn't make sense to have a dog in the minivan fight. It seems as if it might detract from other products like its crossovers, which are pretty good. After all, where are the conquest buyers going to come from? Honda, Toyota, and Chrysler have cornered the minivan market. It's going to take a lot of effort to make an impact and that effort will come at the expense of other Kia models.

Unless, Kia is planning to introduce an all-wheel drive Kia minivan. That might be the only way a Kia minivan sticks out from the competition. Then it can go head to head with Toyota and steal some business. But who knows if it will be enough to justify the expense?

Change Your Marketing
That's a tough line for me to write because Kia is heavily invested in the NBA and has twice taken me to NBA games because of it. Heck, Kia gave me a signed LeBron James jersey that I turned around and sold as a benefit for my daughters' school. They also gave me a Paul Pierce jersey that I donated to a walk for Haiti. I love the fact that Kia and the NBA are best friends.

But maybe it's time to move on to something that attracts more women. It's great to be getting all those male eyeballs but for true growth it's going to need to get in front of the ladies.

I know. I'm going to be lambasted for suggesting women don't watch the NBA. I'm sure they do but the numbers can't be anywhere near the amount of men. Hyundai has The Walking Dead. Maybe Kia should latch onto Project Runway. I don't want the designers on that show touching the exteriors but maybe they could jazz up some interiors and have special editions.

OK, those are just some of my suggestions. Feel free to jump in with your own in the comments section below. I don’t pretend to have all the answers but I want to see Kia succeed in the years to come. It's a great brand with some really talented people. I want to see it be at least the equal of Hyundai.