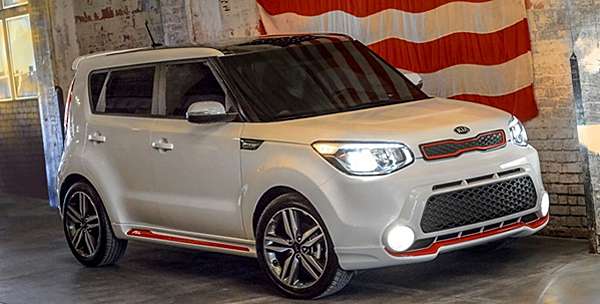 The 2014 Kia Soul is a shining light in the Korean automaker's lineup, which could explain why a special edition Red Zone model is being rolled out. But, one has to wonder, why is a brand-new vehicle getting a special edition already?
Advertisement

Special editions, unless you're talking Chevrolet, which is rolling out a Z06 Corvette just months after being introduced, usually seem to be the bailiwick of vehicles that are starting to soften in sales. That doesn't appear to be the case with the 2014 Kia Soul that sold 12,870 in its first full month of sales. It's really been on the market probably less than 8 weeks and a special model is rolled out.

In my opinion, that strikes me as strange timing. Why take the spotlight off a hot seller and introduce a special edition so soon? Normally, I would defer to the wisdom of the Kia marketing team, because it has been on a roll, but as I pointed out in a recent article, Kia is softening while competitors get stronger.

So, what is this “Red Zone” edition Soul? It's inspired by the Wild Track’ster Concept that was introduced at the 2012 Chicago Auto Show and it is the first special edition based on the all-new 2014 Soul. I haven't driven it yet but people really seem to like it from all indications.

There will be a limited production of 2,000 “Red Zone” edition Souls to arrive in dealers in first quarter of 2014. Based on the Soul Plus, the “Red Zone” Soul features a white exterior paint with sporty red accents and unique interior trim.

“The Soul has always appealed to those who choose to express their individuality through their vehicle, and special editions have been a part of the lineup since the first-generation Soul went on sale in 2009,” said Michael Sprague, executive vice president, marketing & communications, Kia Motors America, in a press release. “The Red Zone Soul underscores that independent spirit and brings to life many styling features from our wild Track’ster concept.”

Kia Soul Red Zone Features
Based on the 2014 Soul Plus, the “Red Zone” Soul has white exterior paint and a styled body kit featuring red accents throughout, including treatment on the front grille, front and rear fascias, and side skirts. As you can tell by the photo above, it looks pretty sharp.

Custom 18-inch alloy wheels fill the wheel wells and keep the “Red Zone” Soul firmly planted on the tarmac. That's an upgrade from the Kia Soul Plus that gets 17-inch models. You would need to move up to the Kia Soul Exclaim (a frustratingly bizarre name for a trim level that probably market tested well) to get 18-inch wheels.

Power comes from Kia’s 2.0-liter gasoline direct injected (GDI) four-cylinder engine that puts 164 horsepower to the ground via a six-speed automatic transmission and 151 lb. ft. of torque. As I mentioned before, I haven’t driven one yet so I'm curious to see what the slightly higher torque number means on the open road. Bad pun alert – Seems like the Soul might spend a lot less time in the Red Zone, of the tachometer that is.

As with all previous special-edition Souls, the “Red Zone” will be offered in limited quantities. Just 2,000 examples will be available.

About the 2014 Soul
The all-new 2014 Soul rides on a new chassis that is stiffer, longer and wider. The Soul’s new dimensions allow for more passenger and cargo room while NVH levels have been reduced. Kia proclaims the 2014 Soul a nimble and agile companion in congested urban environments (where most Americans don't drive) and inside there is a long list of standard comfort and convenience features, including Bluetooth wireless technology and steering wheel-mounted controls.