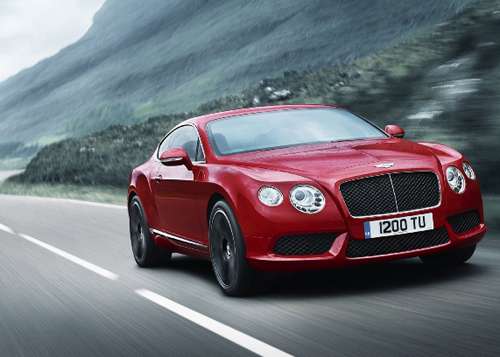 (TorqueNews) - It could very well be that Bentley is feeling the need to be more fuel efficient with its introduction of two new V8 models at next month's North American International Auto Show in Detroit.
Advertisement

The key wording there is "more" because the new models being introduced, the new 4.0 liter, twin turbocharged V8 Continental GT coupe and GTC convertible, are not ever going to be accused of being fuel efficient but they will still be mind blowingly powerful.

This new Bentley V8 engine delivers maximum power of 500 horsepower at 6000 rpm and a peak torque of 487 lb ft that is available across virtually the entire revolution range from 1700 to 5000 rpm, providing exhilarating performance and effortless power delivery. Combined with a new close-ratio 8-speed automatic transmission, Bentley told TorqueNews that this translates into a sub-5 second acceleration time for the 0-60 mph sprint and a top speed of more than 180 mph. In other words, it's fast.

But it's not as thirsty as Bentley's usual engine of choice: the flagship 6.0-liter W12. The arrival of the new V8 Continental models fulfils Bentley’s environmental commitment to produce a new powertrain that delivers a 40 per cent improvement in fuel efficiency and CO2 emissions. The new V8 engine features variable displacement with a highly sophisticated engine management system, ensuring a seamless and imperceptible transition from V8 to V4 mode under light throttle load.

That's right – the new Bentley is going to have a cylinder deactivation mode like you find on more pedestrian, domestic vehicles. One can only imagine what other domestic technology will be taken next.

The new V8 engine will be available in two models; the Continental GT and the Continental GTC. These models are distinguished by a black gloss matrix grille with chrome frame and center bar, a red enamel Bentley ‘B’ badge, and a black matrix three-segment lower front bumper divided by distinctive body-colored strakes. At the rear, unique chromed ‘figure eight’ exhaust tailpipes, a dark lower valance and red enamel ‘B’ trunk lid badge emphasize the sporty, contemporary identity of the new V8s, according to Bentley. Of course, they also distinguish the V8 models from the more expensive Bentleys so now even Bentley owners can be looked down upon by other Bentley owners.

Probably the main question here is going to be, "What is the take rate?" Are there going to be Bentley customers out there who are looking for better fuel economy? Maybe wealthy prominent green living proponents will feel better about themselves if they opt for the smaller V8 engines in the 2012 Continental GT and the Continental GTC models.