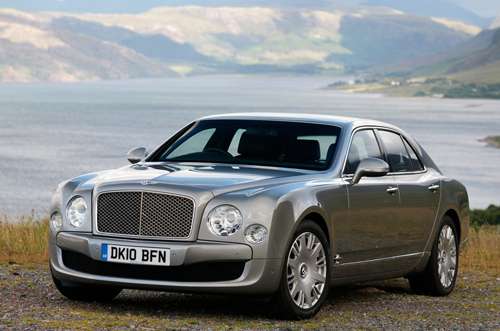 Bentley Bestowed Best of the Best by The Robb Report

There's the best and then there's the best of the best, which is what the Robb Report has bestowed upon the Bentley Mulsanne to be, according to an announcement from the British luxury car company.
Advertisement

Bentley Motors executives accepted Robb Report magazine’s prestigious ‘Best of the Best’ award for luxury sedans at the 2011 Los Angeles Auto Show. Christina Cheever, director of Robb Report’s automotive relationships, presented the award on the Bentley stand to Alasdair Stewart, member of the board for sales and marketing, and Christophe Georges, president and COO for the Americas.

The Mulsanne is truly the best of the best at least from a brief five days I spent with it last summer. Underneath the hood sits a 6.75-liter (or six and three-quarter liter in Bentley speak), V8 that is currently rated at 503 horsepower with an eye-popping 752 lb. ft. of torque that reaches its peak at a low 1800 rpm on the rear-wheel drive sedan that sits on 20-inch tires. The push rod engine is mated to an eight-speed automatic drive-by-wire transmission that can be shifted from the steering wheel, a first for Bentley.

You're not overtly conscious of its fast acceleration because the Mulsanne is so silky smooth. Yet a quick glance at the speedometer quickly reveals the errors of one's ways on the highway. That experience is also enhanced by the drive dynamics control system that allows the driver to set the suspension to Bentley, Sport or Comfort (and befitting the bespoke nature of Bentley, custom).

Adjust the setting to sport and the Bentley acts like a car weighing much less than its curb weight of 5700 lbs. It's also much nimbler than its 220-inch length would suggest. Interested in comparisons? A Cadillac Escalade ESV, the extended Escalade, is only 2 inches longer – and that's a mammoth, three-row SUV that can swallow a dishwasher behind the third row.

My favorite feature in the Mulsanne was the sound system. This luxury sedan, that could arguably be called the ultimate in refinement, was equipped with the optional 2200-watt sound system with 20 speakers. Its nearest competitor among manufacturer installed equipment is a 1200-watt sound system from Jaguar.

This is a sound system that puts out high quality tones at about one-fifth of its power. The most I could do was crank up this system to about three-fifths of its potential before I had to surrender. Like any Baby Boomer, I'm already going deaf. I didn't want my hearing loss to accelerate like it was being driven in a Mulsanne.

The prominent ‘Best of the Best’ award was presented in front of Bentley’s new Mulsanne Executive Interior Concept, a multimedia connectivity concept that offers an impressive array of bespoke business, comfort and entertainment features. The Mulsanne EIC is designed to allow customers to conduct business on the move or just unwind between meetings - all beautifully integrated into the sumptuous and comfortable cabin. Mulsanne rear passengers receive individual Apple iPad workstations with full internet access (integrated into retractable picnic tables) while a large, drop-down LED screen ensures that a wide selection of movies as well as television can also be enjoyed.

Bentley is on a sales juggernaut of late with the U.S. market appearing to be the best of the best when it comes to some sales. Bentley sales to the end of October increased 33 percent to 5,379 putting the company on track to reach its target of 7000 cars sold this year. U.S. sales are in line with this increase, with the new Continental GT coupe accounting for 37 percent of all sales in the market - despite reaching showrooms only in April. The U.S. market accounts for roughly half the world’s Bentley convertible sales making it the number one market for the new Continental GTC.