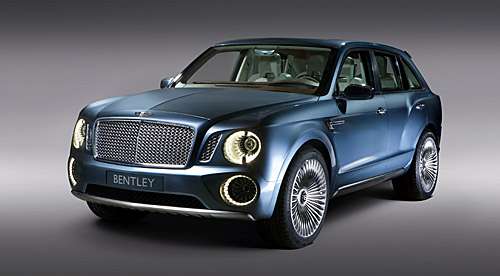 Bentley is calling the EXP 9 F a potential third model-line but it all but confirmed its production with the news of three powertrains, including a surprising hybrid.
Advertisement

Long known for its powerful powertrains, Bentley may be known going forward for an electrically powered powertrain. In its announcement today, Bentley said the hybrid V6 would be capable of 0-60 in five seconds and be able to run on electric power for close to 20 miles. It would also be considered an ultra-low emission vehicle.

“We are very excited by the potential of a high performance, ultra-luxury Bentley SUV. Since we first showed EXP 9 F at Geneva, the response has been overwhelming. Everyone seems to agree that an SUV is a natural fit for Bentley. An exciting range of drivetrain options including a hybrid V6 are under active consideration but one thing is for sure, any Bentley SUV would offer the thunderous performance for which the marque is renowned.” Wolfgang Dürheimer, chairman and CEO, Bentley Motors, said in a news release.

Oh yeah, it gets some other more typical powertrains. Bentley said the all-wheel drive luxury sport utility vehicle will get the recently launched 500 horsepower, 4.0 gas powered V8 as well as the Bentley 6.0 liter, twin-turbocharged W12 gas engine, developing 600 horsepower and 590 lb. ft. of torque coupled with an 8-speed close-ratio transmission.

The EXP 9 F is a much better looking vehicle in the flesh than comes across in photographs. Bentley had an exclusive showing for the media and potential customers at a venue outside of the New York Auto Show. It's going to be a huge hit among the 1 percent of the population that can afford it.

Let's allow the Bentley folks to describe it: "The exterior is a bold, dynamic statement, combining clean, muscular surfaces with signature character lines, while retaining the qualities of luxury and power – a pure Bentley.

"Key Bentley cues such as the matrix grille, round lamps and the strong power-line and haunch along each flank are reinterpreted for EXP 9 F. The ‘hewn from solid’ design language and innovative detailing, emphasise the robust character of this high-luxury SUV.

"The designers were inspired not only by the more functional nature of EXP 9 F but by the ‘visible engineering’ of the famous Blower Bentleys. For example, the day-time running lamp apertures also act as the charge cooler air intakes for the twin-turbo W12 engine, each with a dramatic, mesh-covered turbine fan design and ‘rifled’ inner surface finish.

"The turbine theme continues with the stunning 23-inch alloy wheels, the design of which complements the sculptured coachwork. The multiple spokes are reminiscent of the shape of turbine fan blades while the centrally mounted wheel nut is a visual reference both to Bentley’s Le Mans racers of the 1920s with center-lock spinner and to the single nut found on the modern-day Speed 8’s high-tech racing alloys."

Will the EXP 9 F see production? Bentley is, of course, hedging its bets, but the introduction of a possible hybrid powertrain is such a departure for the luxury automaker that production has to be considered a strong possibility. Plus, the hybrid would be easy to adapt to the rest of its lineup.