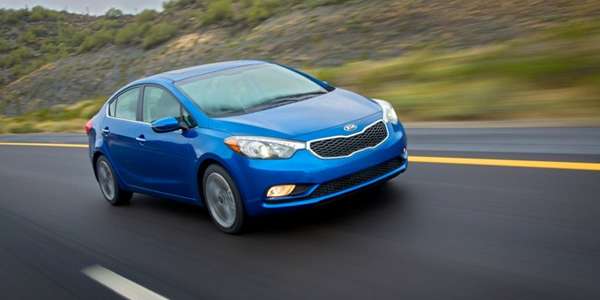 Among Compacts, One Kia Model Judged the Best

Judges from three media organizations that specialize in covering the automotive industry have proclaimed a Kia compact to be the best compact sedan "in its league" and it was up against some stiff competition.
Advertisement

The all-new 2014 Kia Forte was recently named by Cars.com as the best compact sedan, according to a news release. The multi-day Compact Sedan Challenge brought together experts from Cars.com, USA Today and PBS' MotorWeek to conduct a series of tests on a competitive set of vehicles and combined their professional assessments with the real-world opinions of car shoppers currently in the market for a compact sedan.

OK, in my opinion, normally the last part of that sentence is problematic. Car shoppers are easily swayed. They can't really get to the meat of what makes a car good or bad in the short time they spend behind the wheel.

But with the 2014 Kia Forte they have made a good choice. As previously reported on TorqueNews, "The 2014 Forte Sedan has received a total makeover and is now bigger and sportier than the outgoing model. It has new European styling that will appeal to a new buyer that Kia is trying to attract. And with an MSRP of $15,900, it looks like they hit their mark. The Forte competes in the very competitive compact segment and gets a new exterior sporty profile, two new powertrains, and greater interior space that should help it stand out."

The TorqueNews piece continued, "The 2014 Forte is offered in three models: LX with a 1.8-liter engine and manual transmission starting at $15,900; LX with a 1.8-liter engine and automatic transmission with a base price of $17,400; and EX with a 2.0-liter GDI powerplant and automatic transmission beginning at $19,400. Destination charge for all three models is an additional $800. The more powerful 2.0-liter 173-horsepower GDI model offers fuel economy of 24 miles per gallon city/36 highway/28 combined."

This year's competition included the 2014 Ford Focus, 2013 Honda Civic, 2013 Hyundai Elantra, 2013 Subaru Impreza, 2013 Nissan Sentra and 2014 Toyota Corolla. The Kia Forte bested all the rest with its roominess, performance and premium amenities, according to the announcement. The Compact Sedan Challenge judges cars based on a series of criteria, including fuel economy, comfort, styling and drivability.

"The Forte truly stood out against the competition," said Patrick Olsen, Cars.com's Editor-in-Chief. "Between its dynamic exterior styling, impressive standard features for the price and excellent ride and handling, the 2014 Forte is a well-rounded car that checks off all the boxes of the perfect, affordable compact sedan."

"The Forte is designed to bring our customers premium amenities at an affordable price," said Michael Sprague, executive vice president of marketing & communications, KMA. "Cars.com's recognition of the 2014 Forte as being the best compact sedan among these worthy contenders clearly highlights Kia's commitment to quality and value for our customers."