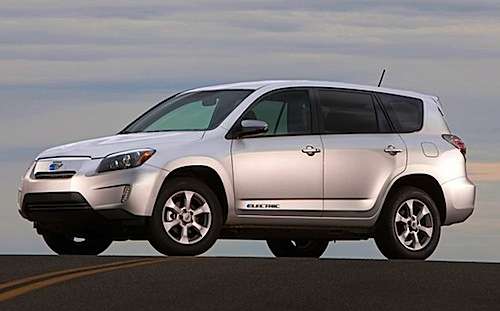 Toyota brought its all-electric RAV4 at the AltCar Expo with surprising fanfare. A short time behind its wheels was convincing enough to have two sold.
Advertisement

If read yesterday’s article on AltCar Expo here,
AltCar Expo Lets You Test Drive Tomorrow's Cars, you’ll understand better what the event is about. It’s not an auto show but more of a technology showcase of what companies and startups are working on. More than that, it’s a way to meet the people behind breakthroughs, at least with start ups and get to test drive vehicles, if only around the block. Today, we look at two prominent heavy weights, the Toyota RAV4 EV, the Honda Fit EV and finally the beautiful Kia Optima Hybrid.

Toyota Gauges Interest. If you also read our article announcing how Toyota was backing away from pure electric cars and focusing on hybrids instead, Toyota Scales Back Electric Car Roadmap, the Toyota RAV4 EV is a bit of a puzzle. If success is to be gauged by yesterday quick drive, then Toyota will rejoice at the high interest for the RAV4 EV. The line to get in was long, the registration full and the first day showing it was rumored to have incited two people to buy it on the spot.

Technically Speaking. The RAV4 EV is a far evolution from the original one more than a decade earlier. Sporty a hefty 154 HP and a strong 273 lb-ft of torque, the 0 to 60 mph is sprint in under seven seconds in Sport mode, about 8.5 in regular mode. The difference is the Normal mode optimizes range and limits torque to 218 lb-ft. There are two recharge options, in Standard mode only 35 kWh is charged giving you about 92 mile range. The Extended mode fully charges the pack for 113 miles. It will take about 6 hours on a 240v charging station and 44 hours on a regular 120V emergency charger included.

The Driving. While this is hardly a test drive and more a drive around the block, the Toyota RAV4 EV showed very surprising accelerations and very predictable handling. You can definitely feel the Tesla Motors DNA in this SUV giving you frank launches screeching tires effortlessly, in both modes. The handling is what surprised me most. While heavier than a the gasoline version, its lowered center of gravity enhances its stance and made me feel very comfortable in it.

While detractors may say that the Toyota RAV4 EV is basically a “compliance vehicle”, it does have its strong points and shows what a regular car company, such as Toyota can do outside of its field mastery. Yes, it might largely exist due to the Californian mandate requiring 15.4% of new automobiles sold to be plug-ins, electrics or fuel cell vehicles by 2025, but the RAV4 EV is probably one of the best driving SUV on the block.