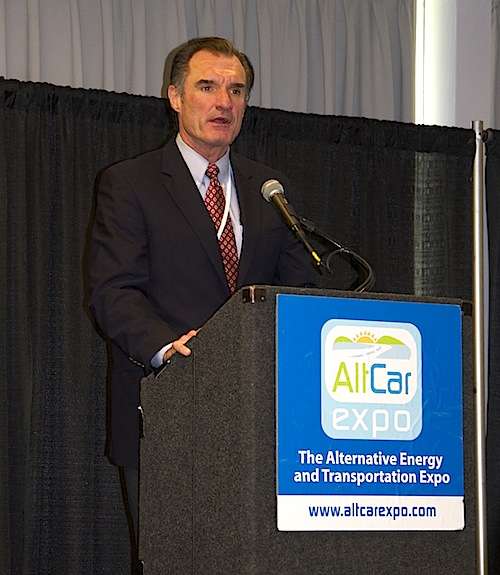 Of all the car show you should attend, AltCar Expo is THE one. This year shows how far the event has grown.
Advertisement

The opening Keynote and panel concentrated on the biggest problem of the century, how do we break our petroleum addiction without bashing it.

Mark Smith from the Department of Energy in charge of the National Clean Cities Program explained how important it is to have a comprehensive fuel policy.. Looking back the past decades elected administrations backed pet fuel projects, such as hydrogen, ethanol to pure battery. We need a more all-inclusive energy strategy, since there is no silver bullet.

If petroleum imports were reduced from 60% to 40 in the past, we are still very wasteful. This was shown by not spending money on a pressure valve that gave us the worst ecological disaster in the Gulf of Mexico, to the wasteful harvesting techniques of CNG and the ecological disasters of oil fracking. Considering road transportation is 80% of our oil addiction, this represents $1 billion a day importing petroleum.

Peter Ward, from Alternative Fuels Advocates, LLC. feels we are docile dealing with ever-climbing gasoline price. A few years ago gas went past $4, consumers were mad. Today they spend $4.50 with little complaint. Peter also feels the adoption of alternative fuel use must be scheduled, such as the reduction of petroleum use.

Lastly, Terry Taminen, of Seventh Generation, touched on the consequences of a petroleum based economy and its related health issues leading to loss of productivity. Congress continued petroleum subsidies when companies showed profits in the middle of the recession.

One interesting tidbit Terry mentioned was that CNG production can waste up to 60% of the pocket. This is an ecological disaster in the making. If we could use petroleum with 100% efficiency, we would use less of it, make it more reliable, and avoid many disasters. He also mentioned the alternative energy group needs to stop pointing guns at each other. His prediction is that in 7 years, this “alternative car show” will be mainstream and conventional auto shows will be “alternatives”.

Although everyone feels petroleum is a good thing and certainly without it, the industrial revolution wouldn’t have happened, the general feeling was that we are wasteful in how we produce it, use it and have to wizen up to it. In other words, we need to start respecting energy more and stop using it in such wasteful ways. As usual, AltCar Expo always gets to the point, and next we’ll talk about the car drives.