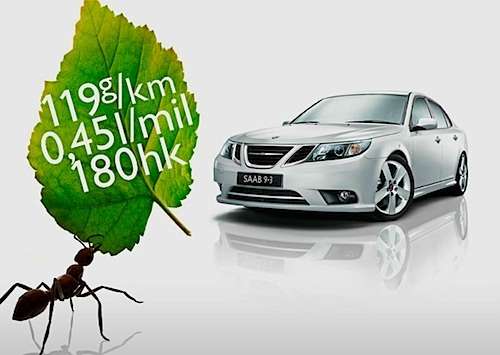 The recession has had a very positive effect on electric cars, unfortunately at the expense of traditional gasoline car makers, Saab being no stranger to this.
Advertisement

The fiercely loyal Saab followers will not let Saab go away. The quirky car company has enjoyed an incredible following, along with a string of interesting and ground breaking cars. All of this was fine until it, like many other smaller carmaker players they were swallowed into larger auto maker portfolios. From then on, it was a downhill spiral.

Big And Small Players Have Different Cultures. It’s usually sad to see a niche carmaker become part of a mainstream global auto maker portfolio. It’s also usually a question of survival that comes at a price, ironically enough, its own life. You fear what made the smaller player special, its culture will be diluted. Unfortunately, it happens more often than not and Saab was an example. So how do you save a bankrupt niche car maker? Enters the scene an unlikely group of electric car consortium.

National Electric Vehicle Sweden. The new electric car consortium involves a few interesting key players, namely the former Volvo Trucks head Karl-Erling Trogen who is spearheading the bid to buy the assets of the bankrupt Swedish car giant Saab. The next one is a new player, Youngman, the Chinese car company that tried its luck to previously through talks with Viktor Muller, the Dutch entrepreneur behind Spyker Cars. Skyper has since then dropped out of the process, although its name still appears on the Saab website. If you follow the money trail, it will lead to a Japanese-Chinese automobile consortium, whose 245 shares of its total 500 are owned by Sun Investment. The rest, 255 are held by Mikael Kubu, the President of Ac-Gruppen, a law firm based in Gothenburg. Are you getting a clearer picture now? Good, because no one else is.

As for GM, Saab’s former owner, it claims it is not negotiating with any prospective buyers, either for the entire company or licensing key Saab technology. Confused yet?

This leaves us with a few interesting questions. Will the smaller car makers find a rebirth via the electric drive? Are those smaller players that were, let’s be honest ruined by larger car makers in the middle of a catastrophic recession key assets for electric cars, EVs? It stands to reason they would. Consortiums with access to battery technology would stand to win the most from buying a bankrupt car company. It’s key technology and even its assembly line could be used to pump out EVs with little financial outlay. In the meantime, the prospect of Saab being bought by industry veterans and a consortium with battery assets might be the lifeline the company deserves.

Anonymous wrote on May 24, 2012 - 5:46pm Permalink
GM bought SAAB for one reason only. To KILL it, and it did. Unfortunately big car companies don't want high efficiency. Big car companies don't want hydrogen powering our cars or electric motors powering our cars that is the only reason they buy out the small companies and then kill them off. We should ALL be running on cheap hydrogen at the moment. We should not be using gasoline. But ... the world runs on gasoline...!!! I hope SAAB proves everyone wrong. I like SAAB always did. Good luck to you SAAB. Give them all a beating....
laspaled wrote on May 25, 2012 - 8:01am Permalink
Your comments have a bit of irony to me as I traded in my 2008 Saab 9-3 for a 2012 Chevrolet Volt. Saab coming back as an EV brand would be wonderful. I have been fortunate to drive both the 9-3 and the Volt and enjoyed them both but the future is going to be vehicles that do not use gasoline.
Nicolas Zart wrote on May 25, 2012 - 2:26pm Permalink
I think it makes perfect sense for Saab to become an EV company. After all, the company is anything but predictable. It's quirky and unusual past has always surprised its fans. I say, set it free. Let it be an EV player!
Nicolas Zart wrote on May 25, 2012 - 2:25pm Permalink
I'm not sure GM had that intention deliberately. GM has the same problem most other global companies have, car lovers are not running but financial "experts" who make final decision based on ROI. They obviously haven't done a very stellar job at that. I'm sure when we see more passionate car lovers climb to the CEO and Chairman level, those companies will do better. UNtil then, expect a see of look alike and financial profitability.
Anonymous wrote on May 24, 2012 - 8:24pm Permalink
this is another investor trying to work together in a hard market seeming little or no other way but to benefit in a joint alliance in a single consortium company as a was part done with Chinese BYD company 10percent owned by American in seeming the money future potential and benefits in it
Nicolas Zart wrote on May 25, 2012 - 2:30pm Permalink
The obvious thing here is that consortium(s) and energetic startup(s) have shown global carmakers they can seriously challenge them, if not at profitability game, with mass appeal. If a Sino/Japanese consortium backed by Western industry veterans claim Saab, it will be no different than the global car manufacturers using parts made everywhere and held by investors from around the globe. I guess it is a global world after all.