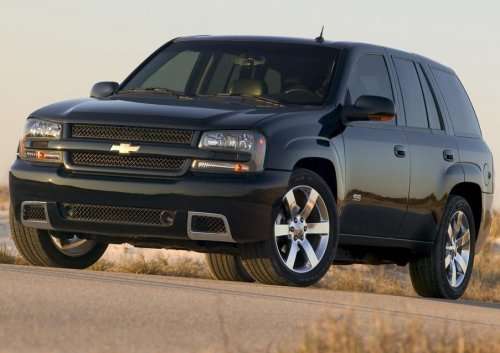 The National Highway Traffic Safety Administration has announced that they have upgraded their preliminary investigation of the 2006 and 2007 Chevrolet Trailblazer to an engineering analysis while also adding the GMC, Buick, Saab and Isuzu, a move which could lead to a recall of 341,786 vehicles in the US.
Advertisement

The National Highway Traffic Safety Administration opened the preliminary investigation into the 2006 and 2007 Chevrolet Trailblazer sport utility vehicle in February 2012 after receiving 12 complaints that the driver’s side door inners were smoldering. These 12 complaints reported damage to the inner door panel of the driver’s door along with some fire damage to the driver’s seat but luckily, no injuries or deaths were reported as a result of this potential problem. This initial investigation included around 309,000 Chevrolet Trailblazer SUVs from 2006 and 2007. Click here for a closer look at the initial investigation.

Since then, the number of complaints about the fire-prone Chevrolet Trailblazer registered with the NHTSA has ballooned to 83 people, with 66 of them stating that the power window switch module had melted or caught fire while the other 17 reported that their power window operation had become erratic or completely nonfunctional. Out of those 83 reports, 28 consumers experienced a door fire and in an unspecified number of those complaints – the vehicle was not being driven. Even with all of those added incidences of smoke and/or fire, there have still been no injuries or deaths caused by this issue.

On top of those complaints filed with the feds, General Motors has received 167 reports of problems of a similar nature and an additional 698 warranty claims relating to a driver’s side power window switch failure. Based on the findings of the NHTSA during their preliminary investigation, they believe that there is enough cause to move onto the engineering analysis stage of the process; a move which is often the last step before the NHTSA orders a recall.

On top of the 2006 and 2007 Chevrolet Trailblazer, the “new” engineering analysis into the power window master switch also includes the Buick Rainier, the GMC Envoy, the Saab 9-7x (as if Saab owners don’t have enough things to worry about!), and the Isuzu Ascender. Adding those other four vehicles from the 2006 and 2007 model years raises the total scope of the investigation – along with the pending recall should a flaw be found – to 341,786 vehicles.

Considering the high number of warranty reports related to the driver’s side power window switch combined with the reports of failing switches and fires – it comes as no surprise that the feds want to take a closer look at the inner workings of these models’ driver’s side door. Should the NHTSA find that there is a component or design aspect that is increasing the likelihood of fire in the driver’s side door panels of these GM sport utility vehicles, the government group will instruct GM to recall these 341k+ vehicles to address the issue. On the other hand, a great many of these investigations – even at the engineering analysis stage – are dismissed without any further actions being required by the feds.

TorqueNews will continue following this story – bringing you any news as it becomes available!