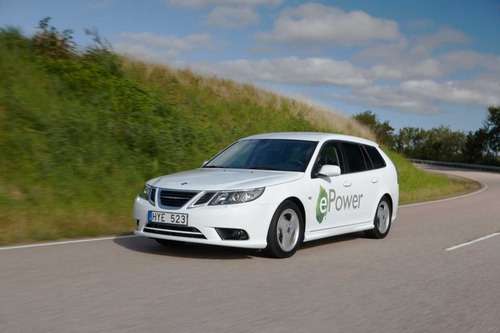 Bankrupt automaker Saab has been purchased by a consortium of Chinese and Japanese companies specializing in clean energy technology investment, who plans to resurrect Saab as an electric car maker with sales initially targeted for the Chinese electric car market.
Advertisement

The quest to rescue the Saab brand has fallen upon a consortium of Chinese, Japanese and Swedish investors, with the launch of a new company, National Electric Vehicle Sweden AB (NEVS). The company's first goal will be to resurrect the Saab 9-3, as an electric car, targeting it for sale in China because of strong demand for electric cars in China.

As rumored a couple weeks ago (see: SAAB Could Become An Electric Car Company and Electric vehicle company may have purchased Saab), NEVS has agreed to buy, for an undisclosed price, the bulk of the assets of Saab Automobile AB, Saab Automobile Powertrain AB and Saab Automobile Tools AB. An earlier deal had been scuttled by GM over ownership of patents and technology, and as a result the current deal does not include Saab Automobile Parts AB, as well as intellectual property rights regarding the Saab 9-5. The new company will own the Saab brand name, trade marks, trade names, and other branding. NEVS will be headquartered in Trollhattan, where development and production will be focused on electric cars.

While the initial goal is an electric Saab 9-3, presumably it will be the 9-3 ePower concept car. At the 2010 Paris Auto Show, Saab unveiled the Saab 9-3 ePower, based on the 9-3 SportCombi wagon. That concept car had a 35.5kWh lithium-ion battery pack, a top speed of 93 miles per hour (150 km/h), and an estimated driving range of 125 mi (201 km). It used a 135 kilowatt (181 horsepower) drive train from UQM, and batteries from Boston Power. The ePower was to have begun a two-year trials, with 70 vehicles, in Sweden, with the goal of turning the on-road testing into a production vehicle. There was no word on whether UQM and Boston Power will continue supplying components for the new electric 9-3.

A presentation released by NEVS shows a roadmap of two electric vehicles. The first, to be launched in 2013/14, and a second to be launched later. The second Saab EV will be based on Japanese electric vehicle technology and the Phoenix platform. It also projects electric car sales in China to be much larger than in other companies, however by 2020 U.S. and Chinese electric car sales should be roughly the same.

Because GM owns the rights to the Saab 9-5, that car is not (at this time) planned to be resurrected by the new Saab (NEVS). James R. Cain, manager of GM financial news, is quoted by Inside Line saying: "We don't own Saab common stock. We owned preferred stock that we wrote down to a negligible level upon receipt. The technology license issue revolved around the (Saab) 9-5 and 9-4X that we built for Saab. We're not involved in the liquidation and sale of the company."

According to the NEVS website, the consortium is 51% owned by National Modern Energy Holdings Ltd., a Hong Kong company focusing on alternative energy and biomass energy in China, and 49% owned by Sun Investment LLC, a Japanese company that invests in green technology companies.

"China is making large investments to develop the electric vehicle market. This drives the technology shift is going to reduce dependence on fossil fuels. More and more Chinese can afford the car, but the world's oil reserves are not enough if everyone buys gasoline or diesel vehicles. The Chinese customers are looking for a premium electric car. With the purchase of Saab Automobile in Trollhättan, we will deliver it," says Kai Johan Jiang, founder and majority owner of National Modern Energy Holdings Ltd.

While Saab fans are no doubt breathing a sigh of relief, as are those of us who want to see more electric car manufacturing activity, let's stop and consider the broader significance. This represents yet another company falling into the ownership sphere of China. This is a pattern some refer to as a new Sputnik Moment. China has big plans to be a leader in clean energy technology, while the U.S. is stuck in a deep partisan divide that's threatening to destroy the nascent clean energy technology industry while it's still being birthed. The "new Sputnik Moment" concept is that, unless the U.S. and other Western powers step up investments in clean energy technology, China will be the leading player in this increasingly important market. That would leave the U.S. and other Western powers vulnerable. Just as OPEC today controls the energy (fossil fuels) driving the transportation system, so too would Chinese control of clean energy technologies that will drive the future transportation system.

"I am very pleased that we can take advantage of Saab Automobile's expertise in vehicle design and production. We can now start a new future-oriented activities in Trollhättan. There is a production of top-quality. We combine Swedish industriell experience in design and manufacture of Japanese electric vehicle technology and a strong presence in China. Electric cars powered by green electricity is the future and the future of electric cars come from Trollhattan," says Karl-Erling Trogen, chairman of NEVS.

Anonymous wrote on June 14, 2012 - 7:08pm Permalink
they should add a small turbine to produce electric power for the motors when the batteries are depleted. This way they will have a winning car model for sure.