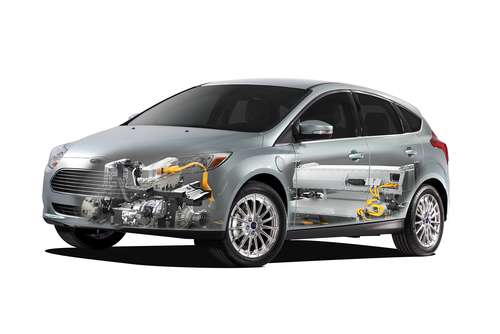 If electric cars are our future, the automakers are following different paths to that goal, where most are focusing attention on one or two flagship electric vehicles, Ford is working on an across-the-board electrification strategy which will take several years to play out.
Advertisement

If plug-in electrified vehicles are the future of automobiles, how should an automobile manufacturer approach electrifying their fleet? Automakers are full of engine design engineers who know how to optimize camshafts, timing belts, and all the other aspects of engine design. Can they wave a magic wand and instantly have every vehicle they sell be a clean all electric vehicle? No. Ford Motors and the other automakers are following significantly different paths to electrification. The shifting capabilities of electric vehicle technology, and changing acceptance level of the customer base, should converge on the mainstreaming of electric vehicles. Multiple paths are being taken to this goal, ones which will play out over the next decade or two.

Nissan, GM, Mitsubishi, and Toyota all have one or two flag-bearer electrified vehicles in their fleet. These are the Nissan Leaf, the Chevy Volt, the Mitsubishi i-MiEV, and the Toyota Prius family. Each of these vehicles are the primarily face of electrification efforts at the respective automaker. Each of these manufacturers make more than one hybrid or electric vehicles, but the named vehicles are held up as the primary example from each in the clean vehicles category.

BMW has been taking an experimentation approach that they say is leading to the BMW i3 and i8 expected to go on sale next year. In the meantime the company built the Mini-E fleet a few years ago, leasing them to customers as a sort of trial project. Earlier this the company called back the Mini-E's, and began leasing the ActiveE instead, again as a sort of trial project. Which is to say that the Mini-E and ActiveE have also served as flag-bearer vehicles for BMW.

Coda Automotive, Fisker Automotive and Tesla Motors all have flagship vehicles, but this is largely because all three are start-up companies and simply don't have the same deep bench of vehicle models as the other automakers. Fisker's flagship is the Fisker Karma, a plug-in hybrid electric luxury car. Tesla's flagship has been the iconic Tesla Roadster, with the Tesla Model S electric luxury car about to supplant that car as the flagship. Coda's flagship is the Coda electric car, launched earlier this year.

Ford Motors, on the other hand, has followed a different strategy that is instead focusing on an across the board electrification of their vehicle fleet. The rollout of that strategy began earlier this year when the company started manufacturing and selling the Ford Focus Electric. Prior to that Ford unveiled their Power of Choice strategy, making it clear that the Ford Focus Electric was to be quickly joined by four other electrified vehicles, the Ford Fusion Hybrid and Energi, the C-MAX Hybrid and Energi. Not only that, but Ford is following a different manufacturing strategy than the other automakers.

Ford is designing their electrified vehicles for manufacturability as either gasoline or hybrid or plug-in hybrid or electric. Each of the named Ford vehicles are built on the same assembly line as the gasoline version. Ford has designed the manufacturing process to simply allow a electric, or hybrid, or plug-in hybrid drive train to be installed as requested by the customer. The effect is similar to when you buy a laptop computer in an online store that lets you click on options to customize the components in the laptop. Many automaker websites offer a similar experience of selecting options one-by-one, and on Ford's website one of those options is the drive train. That is the Power of Choice strategy, to enable Ford's customers to make a choice that was previously unavailable. In the past the customer could not choose the drive train, because even though we could choose the engine size or transmission, it was a a choice between various gasoline burning engines.

Ford's strategy will take several years to flesh out. In last winter's briefing on the Power of Choice strategy, the company made it clear that in the current time frame the company would focus more on fuel efficiency with the EcoBoost engine, than it would on electrification. In a few years, however, the company should have a broader and deeper range of electrified vehicles. The target is for 10-25% of Ford's vehicle sales in 2020 to be electrified vehicles. To Ford, the word "electrified" means the range of electric assist to improve fuel economy, and includes hybrid, plug-in hybrid and all electric vehicles.

One risk to Ford's strategy is that their efforts appear unfocused, or spread thinly. The Ford Focus Electric is apparently being built in small quantities, with a small quiet marketing effort, which make some think the company sees it as a Compliance Car. That is, it appears Ford is building the Focus Electric primarily to comply with regulations like California's ZEV system. Ford counters that by saying the Focus Electric is due to begin a broader rollout, and will be sold in 19 states across the U.S. by the end of the year. Additionally, there is the little matter of those four other electrified cars Ford will begin selling later this year.

What may appear to be an underwhelming effort on Ford's part, may simply be the beginning stage of a broader and more comprehensive electrification of their whole vehicle fleet.

Brian Keez wrote on July 22, 2012 - 1:54pm Permalink
Ford is clearly positioning themselves as a follower when it comes to electric vehicles. The Focus did a very good job of matching or slightly improving all of the Nissan LEAF's features and performance. I drove the Focus EV at EVS26 and it's a great car that clearly use the Nissan LEAF as a benchmark.
JP White wrote on July 23, 2012 - 6:52am Permalink
Mitsubishi have also committed to an across the board electrification effort, which has been slow to get off the blocks. I had hoped to get the Outlander PHEV to replace our Altima and supplement our LEAF. Now I believe the C-Max Energi will be available first and come with more creature comforts. Looks like Ford have a credible strategy to me.
tm256 wrote on July 27, 2012 - 2:33am Permalink
Mitsubishi may be slow on electrification, but they are steadily making progress. Their second EV on the market in Japan, Minicab MiEV, a sibling EV of i-MiEV, is expected to sell to rural areas (where gas stations are sparsely located) and some large corporate clients who would like to be seen as environmentally conscious. Given the high gas price in Japan, in rural areas, particularly on some islands, Minicab MiEV is much more economical than the ICE counterpart.