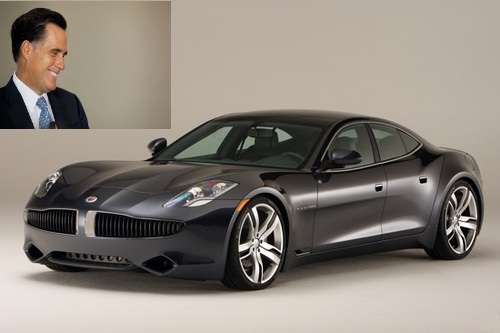 Fisker Automotive is being made into a political football again, with statements by Presidential Candidate Mitt Romney rehashing a litany of unproven or outright false claims from other right wing pundits. The thrust of the comments, which were made yesterday at a campaign stop in Irwin PA, is an attempt to tarnish Fisker Automotive with the sort of stain the punditry has heaped upon Solyndra and other examples of the Green Technology Green Jobs recovery strategy promoted by the Obama Administration. In the case of Fisker Automotive the talking points don't pass muster as representing anything resembling the truth.

“I am ashamed to say that we’re seeing our President hand out money to the businesses of campaign contributors, when he gave money, $500 million in loans to a company called Fisker that makes high end electric cars, and they make the cars now in Finland. That is wrong and it’s got to stop. That kind of crony capitalism does not create jobs and it does not create jobs here.” – Mitt Romney

If this were true, the outrage would be justified. However, Romney's carefully constructed sound bite takes a snippet of data, presents it out of context, arriving at a conclusion that is simply untrue.

First, does "crony capitalism" create jobs, or not? The thrust of the comments are that the Obama Administration is engaging in crony capitalism, and we'll get to that in a minute. Crony capitalism is a practice as old as civilization, and involves powerful business types colluding with powerful politicians to get their way. When a business launches a new factory, or new store, or something, jobs do come into existence whether or not that new business came about because of crony capitalism. In the case of Fisker Automotive the loans to that company from the Dept of Energy did help Fisker create jobs in the U.S. Fisker's headquarters are in Los Angeles, and the company has a significant staff of engineers, designers, and all the other sorts of people one would employ in an automotive company. The company apparently employs several hundred people at its LA headquarters.

Is Fisker Automotive a company owned by a "campaign contributor"? According to OpenSecrets.org, Henrik Fisker has made zero political contributions. However the right wing punditry point to the venture capitalists behind the company as the ones with the Obama Administration ties that raise the spectre of crony capitalism. Recently, Romney campaign Senior adviser Ed Gillespie singled out the venture capitalist John Doerr, because Doerr raised a lot of money for Obama, was appointed to an economic recovery advisory board, and then Fisker Automotive received loan guarantees, and the VC firm Doerr works for (Kleiner Perkins Caufield & Byers) is a big investor in Fisker. However the facts don't quite line up this way.

There is a little detail about which partner at Kleiner Perkins is most associated with Fisker Automotive. That is not John Doerr, but Ray Lane. Ray Lane was the first person to whom a Fisker Karma sedan was delivered, for example. Some of the partners at Kleiner Perkins are big contributors to Republican candidates, including Meg Whitman who is a $100,000 contributor to Romney’s SuperPAC Restore Our Future. Doerr is on the Kleiner Perkins "Greentech Team," meaning he deals with the firms investments in green technology companies. For the Obama Administration to tap on someone like Doerr to advise the administration on green technology investments, would be similar to earlier administrations who tapped on oil or coal or gas industry insiders to give advice on energy policy.

Another detail is the question of whether it was the Bush or Obama Administration that provided the loan to Fisker Automotive. The loan is administered under the Advanced Technology Vehicles Manufacturing (ATVM) Loan Program, which was launched by the Bush Administration. It was funded by Congress in 2008 to provide loans to the U.S. Automotive industry for the purpose of funding projects that would help that industry develop vehicles with higher fuel efficiency and lessen the dependence on foreign oil. 2007-8 was a period of very high fossil oil and gasoline prices, and there was a huge clamor to do something about that problem. The ATVM was the Bush Administrations answer. The loan to Fisker Automotive was not approved until the Obama Administration came to power, in September 2009. By that time an urgent need was to jumpstart new business activity because of the economic downturn.

The loan to Fisker was split into two chunks: a) "$169.3 million ATVM loan for engineering integration costs as it works with primarily U.S. suppliers to complete the company’s first vehicle, the Fisker Karma." b) "$359.36 million ATVM loan for Fisker’s Project Nina, involving the manufacture of a plug-in hybrid in the U.S."

While the Karma is manufactured in Finland by a contract automaker, the design and engineering work is done in the U.S. This is spelled out in the Conditional Commitment letter between the Dept of Energy and Fisker Automotive, noting that this chunk of the loan was only to fund expenses in the U.S. and that expenses in Finland were the responsibility of Fisker. The other chunk of the loan was for Project Nina now known as the Atlantic, a car that was to be manufactured at the former GM plant in Delaware which was being retooled by Fisker to manufacture the Atlantic.

The Commitment letter also spells out a list of milestones Fisker was to meet before chunks of the loan would be released. When the Dept of Energy froze the loans to Fisker Automotive in January, it was because Fisker had failed to meet some milestones, in part because deliveries of the Fisker Karma were delayed by a couple years. The Atlantic was revealed to the public in April, without any word on whether the frozen loans would affect the manufacturing plans for that car. Since then leaked documents have suggested the Atlantic would not go into manufacturing until at least 2014, and more recently it's been suggested Fisker Automotive is looking for other options to manufacture the Atlantic including factories outside the U.S., unless the Dept of Energy loans are unfrozen.

That was a lot of details, what it boils down to is: The loans to Fisker predates the Obama Administration. Because the company failed to meet milestones, the company has received less than $200 million in loans, not $529 million. That the Karma is manufactured in Finland is not an issue in the loan. It's unclear whether this is a case of crony capitalism, if only because previous administrations have made similar deals.

Evelyn Herron wrote on July 18, 2012 - 9:17pm Permalink
I think some of your statements in this article contradict each other. In the 5th paragraph you say "The loan to Fisker Automotive was not approved until the Obama Administration came to power, in September 2009." Did you mean to say that the loan was not approved until September 2009, after the Obama Adm. came into power? Did the application process for the loan start under the Bush Administration, which created the ATVM? This is important because you state in your concluding paragraph that "The loans to Fisker predates the Obama Administration." If the answer is "yes," then we have the Obama Adm. completing a loan process that began under the Bush Adm., and this happened a lot during the transition period of late 2008 to mid-2009. For instance, the Obama Adm. carried out Treas. Sec. Hank Paulson's TARP program to rescue the large investment banks. Republicans like to blame Obama for that and for TARP spending, as if it was all Obama's idea. If, however, the answer is "no, the loan process started after Jan 20, 2009," then one of your conclusions would technically be in error. I think you HAVE made the point that the loans were approved under a program started by Pres. Bush to address the problem of sky-high gas prices in mid-2008, and that is valid in refuting Mitt Romney's erroneous claims about the Fisker loans. Pres. Bush and Pres. Obama agreed with each other on how to address energy problems, and Pres. Obama was trying to create jobs (also utilize an empty manufacturing facility). Only Mitt Romney stands there sputtering about "crony capitalism" and misstates the size of the loan and other facts.
sofaterra wrote on July 19, 2012 - 9:49am Permalink
Fisker has shipped jobs overseas, has closed the Delaware plant. The Obama loan helped Fisker ship jobs to Finland. That is an important issue. The loan was approved by Obama regardless of when i twas initiated.
Evelyn Herron wrote on July 20, 2012 - 2:02am Permalink
You are leaving out a few details. Fisker Automotive has a contract to manufacture the Karma electric automobile in Finland, presumably for the Finnish and European market. All of the engineering and design of the Karma was done in the US at Fisker's facility in Los Angeles, CA. This design facility was financed by about 1/3 of the Dept. of Energy loan and provided many jobs to US citizens in Los Angeles. This facility has met the goals of the loan. It was always intended that the Karma would be manufactured in Finland. In this, and other articles, Mr. Herron has made it clear that NONE of the DOE loan money has financed the manufacturing facility in Finland. Those Finnish jobs were never American jobs to begin with. The other 2/3 of the loan money was meant to finance the retooling of the Delaware plant to manufacture an EV for the American market. This would have created AMERICAN manufacturing jobs. But because Fister did not meet certain deadlines, the DOE froze the loan money. Without that loan money, Fister has not been able to go forward with its plans for the Delaware plant. Mr. Romney keeps talking about a $500 million DOE loan, and implies that this money has financed jobs in Finland. But Fister has actually received less than $200 million, and that money was used for the purpose it was intended. It helped create American engineering and design jobs in Los Angeles, CA. Mr. Romney has a habit of lying or misrepresenting facts. He is doing one or the other in this instance.