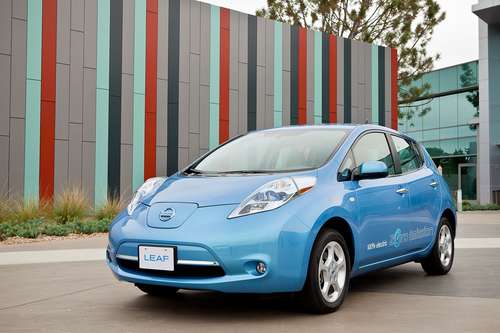 Loyal Nissan Leaf owners, worried about slow sales of the electric car, are debating what Nissan should do to improve Nissan Leaf marketing efforts.
Advertisement

One sign of a extremely loyal following is when the customers of a product start developing marketing pitches, and otherwise begin promoting the product. Worried Nissan Leaf owners, looking at the sales trends, are beginning to earnestly discuss what Nissan should be doing differently to promote the Leaf. Last year the Leaf was selling pretty well. That is, while the Leaf sales were a fraction of typical gas car sales, sales were growing, Leaf sales exceeded that of the Prius in its first years of availability, and Leaf sales compared to past sales of electric cars was phenomenal. Unfortunately, this year Leaf sales have dropped considerably, and while many attribute it to the approval of California HOV lane stickers for the Chevy Volt and Toyota Prius Plug-in, maybe there's something else, the advertising campaign perhaps, that could be improved, according to discussion among Leaf owners.

Nissan's sales goal for fiscal year 2012 (ends March 31, 2013) is 20,000 Leaf's. With 3,148 Nissan Leaf sales so far this calendar year the company has a long way to go to meet that sales goal. The Smyrna TN plant is due to begin domestic production of the Nissan Leaf at a much higher production volume. It may be that Nissan is waiting for that factory before beginning a large scale marketing push. Another issue is that the scuttlebutt conversation says the Nissan Leaf price is expected to fall once that factory begins production, because of a combination of import duties and higher volume production. Whether or not the price drops, the expectation of a lower price in a few months could act to dry up sales.

By the way, for an earlier example of a rabid loyal following of an electric car, recall the GM EV1. That car (and a few other electric cars) was launched during the previous era of electric cars in California. Those electric cars from GM and other makers were built in limited production volumes, epitomizing what we now call "compliance cars": built in small volumes, available only under lease, and offered only in states with strong requirements for low-emissions vehicles. When California gutted the zero emissions vehicle program, GM and the other automakers immediately responded by retrieving electric cars from lease holders and crushing the cars. That led to the DONTCRUSH.ORG campaign, launched by loyal EV1 fans, shown in the documentary movie Who Killed the Electric Car. Some of those fans later banded together to form Plug In America.

While there isn't much sign that Nissan is aiming to backpedal away from electric car production plans, like GM did 10 years ago, one aspect of the GM EV1 story is complaints about the curiously strange advertising GM published. Likewise some of the discussion of Nissan's marketing focuses on the strange advertising for the Nissan Leaf. Such as the singing electrical sockets advertisement Nissan published last winter.

If the two main concerns stopping potential Leaf buyers from purchasing are "range and price," it's up to Nissan to assuage those concerns.

Show families which own two cars, driving the electric car for around-town trips, and the gas car for longer trips. This is the most pragmatic solution to range anxiety today, to own a second car used primarily for the longer trips. Some families are choosing to own both a Leaf and a Volt, but we shouldn't expect Nissan to show such families in their advertising.

Another item to show is the CHADEMO quick charging port on the Leaf, which by itself has the potential to erase range anxiety. Unfortunately the value of that port depends on there being enough CHADEMO charging stations in the public. Rollout of those fast charging stations has been slow, despite announcements of fast charging networks in the SF Bay Area, Chicago, California, and elsewhere. The standards battle between CHADEMO and the SAE DC Quick Charge forces have not helped. This means that while the CHADEMO port is a potentially valuable feature of the Leaf, its value is not being fully realized because the CHADEMO charging infrastructure is not available enough.

Nissan could also create better education about typical driving patterns (the average driver travels less than 50 miles a day by car) that are perfectly satisfied by all electric cars like the Nissan Leaf. One way to demonstrate this is to show a typical urban area, and the number of interesting places to go within a 35 mile radius of a suburban home.

The Leaf purchase price is much more than that of a typical gasoline powered sedan, so how could Nissan address this issue? For example, by focusing on high gasoline prices, especially coupled with the potential to save a lot of money on fuel costs because electricity is a more efficient, lower cost, fuel than gasoline. Nissan fully knows about the effects of high gasoline prices, as that issue was a key part of Carlos Gohsn's recent prediction that electric cars would be 10% of all car sales in 2020.

Is focusing on the "environmental" crowd going to result in enough Leaf sales? Maybe Nissan needs to move beyond the polar bear hugging advertising that appeals to environmentalists. Does an electric car to "save the environment" motivate enough people?

Or, would potential buyers be more motivated by the fun factor? The common response to driving an electric car is the "EV grin" because electric cars, including the Nissan Leaf, are so much fun to drive. Nissan could showcase this aspect, and could perhaps make something out of Nader Asemi's achievement at the recent REFUEL electric car and motorcycle race, where he was able to beat the lap times of a few Tesla Roadsters after doing a few modifications (suspension, etc) to his Leaf.

Another tactic could be to simply show satisfied customers, similar to the "Happy Volt Owners" series by GM showing, well, happy Volt owners.

tony scott wrote on July 7, 2012 - 8:00pm Permalink
its simple nissan needs to sell leafs at cost price for 12 18 months until the market accepts electric cars and then steadly increase profits. tony s.
Anonymous wrote on July 7, 2012 - 9:39pm Permalink
Nissan needs to go back to the drawing board and figure out how to increase the driving range to a real world 100 miles in winter and summer driving conditions. That means a bigger battery pack. A Thermal battery managmnent system to keep batteries at optimum temp and an alternative way of heating the cabin. Maybe an ethanol heater.
Aaron Turpen wrote on July 7, 2012 - 10:47pm Permalink
Easy: make enough of them to fulfill all orders and then begin backlogging at dealerships like most models do so people can actually test drive and take one home instead of getting on a waiting list..
Tony Williams wrote on July 8, 2012 - 8:13am Permalink
I believe that the California white HOV sticker expires Jan 1, 2015.
jstack6 wrote on July 8, 2012 - 11:22am Permalink
Best would be to get congress to stop subsidising OIL. We have been giving money to BIG OIL for about 50 years with no end in site. If we paid the real cost like Europe and taxed the pollution like Germany it would cost $8-10 a gallon and many would change . As the batteries improve and cost go down it will also increase electric vehicle sales. The feature of V2G Vehicle to GRID would pay for the vehicles but not many have offered that great option except ACPropulsion.
Anonymous wrote on July 8, 2012 - 6:52pm Permalink
I cannot read an article and take it seriously when the author cannot BOTHERED to proof read it. Opening para ... One sign of a extremely loyal following is when the customers begin of a given product start developing marketing ... Huh? Read your own article!!! (And stop using f'ing capthca when we are logged in!)
Mark C wrote on July 12, 2012 - 1:04pm Permalink
The rumor is the range will improve with the 2013 year model, the heater will be changed to one that consumes less power, so winter range will improve and it is about to be made in Tennessee, US of A and the pricing is supposed to be lower. After all this, who wouldn't be waiting for the 2013 model. Want to sell more sooner?, beef up the range now and put in the improved heat and AC system and advertise that it was done as a running change and there's no need to wait until next year for the improvements. That should help out.

Tesla-Funded Research Reveals One of The Biggest Mysteries of EV Battery
Tesla Tesla Buyer Nets a Whopping $12,000 Discount After Asking for Reduction
END_OF_DOCUMENT_TOKEN_TO_BE_REPLACED