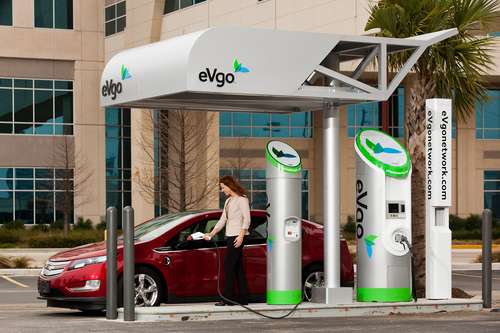 Today the CPUC and NRG released the finalized settlement of the decade-old legal battle over the 2000-1 California Energy Crisis, revealing details of the planned electric car charging station network to be built in California.
Advertisement

In March NRG and the State of California announced a deal that both settles a decade-long legal wrangle stemming from the 2000-1 energy crisis, and also makes a bold move to create a huge network of electric car charging stations in California. Today NRG followed up by releasing the actual settlement filed by the CPUC with the Federal Energy Regulatory Commission (FERC) for approval. The details of the proposed EV charging network we published earlier were based on a preliminary document provided by NRG, and today we have available the finalized agreement (published on the CPUC website).

The agreement stems from a period in California, during 2000 and 2001, where some energy companies abused a flawed deregulated electricity market in California, resulting in millions upon millions of dollars in excess electricity costs in California. Among those companies were certain subsidiaries of Dynegy, that were later bought by NRG, who then assumed legal responsibility. According to a statement by CPUC Commissioner Mark Ferron, "Dynegy together with NRG will have returned to the people of California more than $400 million in consideration" to atone for these acts. Of that amount, $300 million "will be paid in the form of cash to offset the electric bills of customers in California" and the remainder, more than $100 million, is the to-be-built charging station network infrastructure.

The settlement breaks down into five major chunks: 1) $50.5 million to cover at a minimum 200 fast charging stations around California; 2) $40 million investment in electrical infrastructure that will support at least 10,000 level 2 charging stations; 3) $5 million for research and development of new EV charging services; 4) $4 million to support electric car based car sharing programs; 5) $20 million payment to the CPUC.

The company could end up building more than the 200 Freedom Stations, if the cost to build stations drops and NRG ends up having not spent $50.5 million. The stations will be distributed every 5-10 miles, in major metropolitan areas, open on a 24/7 schedule, and located in retail areas near major highways.

In Texas, eVgo's network of Freedom Stations is only available to card carrying eVgo members. In California, however, the stations will be accessible to anybody on an "open" basis. Electric car owners will be able to drive up, provide a credit card, and pay on the spot to charge their car. The cost in this case will range between $7 to $15, and provide "50 miles of charging, in 15 minutes". Customers can become eVgo members, pay a monthly membership fee, and get a level of service that is yet to be announced.

In an effort to "future-proof" the Make Ready sites, each will have a 30 amp capacity. This is enough to support electric cars with a 6.6 kilowatt charge rate, such as the Ford Focus Electric, the Coda electric sedan, and the 2013 or later Nissan Leaf.

The Make Ready sites will be 35% for "multi-family housing" (apartments), 15% for workplaces, 10% for public interest sites, and the remaining 40% at the discretion of NRG at multi-family housing, workplaces or public interest sites. This means eVgo will be concentrating on apartment or condominium complexes and workplaces, leaving many other potential charging station locations open to eVgo's competitors.

NRG will be required to give ample opportunity to hire local workers and local contractors, and hiring women- and minority- owned businesses in constructing both the Freedom Stations and Make Ready sites.

NRG will also be collecting utilization data of the Freedom Stations and Make Ready sites, collating the data into quarterly reports to be shared with the CPUC, California research institutions and appropriate non-governmental agencies, such as the California Independent System Operator Corporation. The point of this is to help the powers that be understand the electrical grid demands that will come from increased electric vehicle adoption. The data will be anonymized and summarized to prevent its use in big-brother-like scenarios. The regulators are concerned about aggregate totals of electrical use, not whether John Smith drove his car to the neighborhood Walgreens at 2AM to charge up.

One competitor, Ecotality, provided this statement: "We are extremely disappointed that our call for transparency and industry input has been disregarded. The NRG settlement is a bad deal for California ratepayers. We are currently exploring all legal and legislative options."-Martin Felli, General Counsel, ECOtality