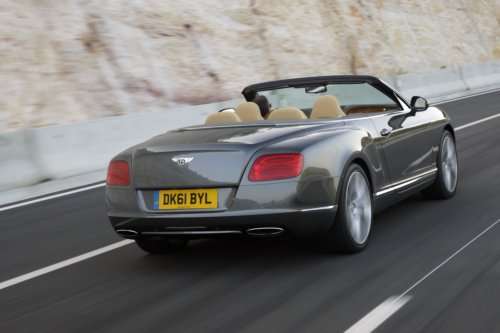 Luxury car manufacturer Bentley says 2011 was a very good year, reaching to pre-recession levels. Here is how Bentley did it.
Advertisement

Is the recession finally on its way out? If 2011 luxury car sales are any indication, then it just might be. Either that, or the rich have decided they’ve practised austerity long enough. Sales numbers are in for 2011 and Bentley Motors says demand for their cars is back to pre-recession levels.

Bentley Motors says that their global sales were up by 37% in 2011, for a total of 7,003 cars delivered. While the big manufacturers produce more cars than that in a day, their vehicles are also a fraction of the cost of a Bentley, so we’re talking serious sales here. In the United States, always Bentley’s best market, sales went up 32%. That represents 2,012 cars sold. Mainland China, a fairly new market for Bentley, had the second most Bentley sales, with 1,839 vehicles purchased. In fact they’d passed the previous year’s numbers in China before the end of July.

Europeans were buying too, accounting for 1,187 new Bentleys or a 53% increase. In Germany alone sales increased 88%. The British weren’t so keen on luxury cars, with sales increasing slightly over 5%, for a total of 1,031 cars. In fact, Bentley says all of their major markets saw sales increase in 2011. December was particularly good, with 1,059 cars being sold (69% more than last year), which they say is their best single month since the recession started and their second best month ever.

According to Bentley’s Chairman and Chief Executive, Wolfgang Dürheimer, “It has been a tremendously good year for Bentley. The dramatic sales growth reflects a global strength to the brand and a recognition of the quality, craftsmanship and engineering excellence of our cars. It is also testament to the work of the entire Bentley Team whose passion and daily commitment has delivered this outstanding result. It has been particularly pleasing to see renewed interest in Bentley in established as well as and new and emerging markets, all of which is contributing to a positive financial result for 2011.”

“We want that success to continue and, with a new Continental V8 set to attract new customers in 2012, have ambitious but realistic plans which reflect global economic conditions as much as our new product line up.”

The Continental is Bentley’s most popular marque, especially now that they’ve added the soft-top Continental GTC. The various Continental models account for most of Bentley’s sales, with the GT alone providing more than a third of their total sales. We’ll have to see if the new soft-top boosts sales even higher in 2012.