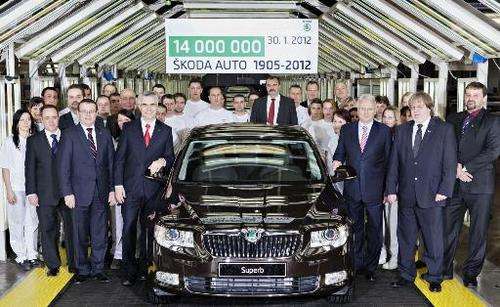 ŠKODA, the Czech automaker, has built its 14-millionth car. This is quite an accomplishment for the Czech brand and it signals that they are posed for even greater expansion in the coming years.
Advertisement

In honor of building 14 million cars since beginning production in 1905, a special edition ‘Laurin & Klement’ Superb vehicle has been built, marking the 14-millionth car to come off ŠKODA's assembly lines. The car was built at the Czech automaker's plant in Kvaniny, Czech Republic The car is designated for delivery to a lucky German customer.

“This celebratory car is an impressive expression of our growth strategy,” says ŠKODA chairman of the board, Prof. Dr. h.c. Winfried Vahland. “We are expanding at a high speed. Almost two thirds of the 14 million cars built by the company were produced and sold in the past 20 years, four million of which were produced in the past 5 years alone.”

ŠKODA is a subsidiary of the Volkswagen Group. VW first became affiliated with ŠKODA in 1991, then in 2000 VW bought the company.

VW hopes to greatly expand it's vehicle sales in the next fear years. Their hope is to compete against Toyota and General Motors for global vehicle sales. It seems the entry level brand will be key to that expansion.

Part of the increase in sales is the brand's aggressive and impressive lineup of new models, which includes the Citigo and the Rapid, which is a compact sedan for the Indian market. ŠKODA wants to introduce an average of one new model to the market every six months in the coming years. This is line with VW's global brand and production strategy.

In 2011, the company sold more cars than ever in its history totaling 879,200 vehicles. ŠKODA plans and hopes to increase its worldwide sales to at least 1.5 million units per year by 2018.

Production capacity will be greatly increased in the Czech Republic and at plants all over the globe. ŠKODA is focusing on growth in emerging markets such as China, Russia and India. Many of these markets have already proven key to growth for many automakers, including General Motors.

ŠKODA will build the compact SUV Yeti will in China. The production will be done in cooperation with Shanghai Volkswagen. The Yeti should begin deliveries sometime at the end of 2012. There are also plans to build a new compact sedan in China at the beginning of 2013.

In Russia, a second production site following the one in Kaluga has been in operation since 2011. As well as this production is expanding in India - with the new compact sedan Rapid having been built at Skoda's Pune plant since 2011.

ŠKODA is a brand that is not sold in the US. It is important to keep note of what ŠKODA is doing though for those interested in global automotive sales. VW views ŠKODA as an important brand in the company's arsenal. With 14 million cars sold, that is definitely the case.