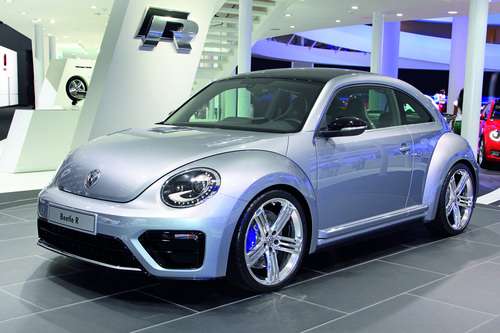 Today at the LA Auto Show the sporty VW Beetle R concept made it's North American debut. The VW Beetle R is still just a concept, but we can already tell it will offer striking looks and performance for this well-known and well loved car icon.
Advertisement

The North American debut comes just two months after the introduction at the Frankfurt Auto Show. At Volkswagen, the letter “R” stands for top-notch performance, a claim validated by the Golf R that goes on sale in January 2012 in the U.S.

Visually, the Beetle R Concept, painted in “Serious Grey Metallic”, offers a glimpse of what the production Beetle R might look like. The Beetle is equipped with striking and unique 20-inch aluminum-alloy wheels, with five triple spokes. The same wheel design is used on the Golf R and Scirocco R, however those cars are fitted with 18- and 19-inch rims. R-design blue brake calipers give the Beetle’s wheels a more performance look.

The front and rear bumpers have both been reworked, being widened by 1.2 inches. The front bumper essentially consists of three air intakes, which are highlighted in contrasting “Black High Gloss.” The middle intake supplies the engine with air, while the outer two cool the brakes. The front spoiler, also is painted in “Black High Gloss”, is designed as a flat splitter (with a chrome strip). These are used in racing to reduce aerodynamic drag and reduce lift. To maintain optimal engine temperatures, even under harsh conditions, vents are found on the right and left sides of the hood.

The rear bumper also has air exhaust vents that are integrated aerodynamically with a diffuser in the lower bumper area. Together with the rear spoiler, which is significantly larger than the Turbo’s, the diffuser helps create optimal downforce at the rear. A visual and acoustic highlight is the exhaust system with its two sets of dual chrome tailpipes.

On both ends, the bumpers transition into free-standing fenders that are also widened by 0.6 inches per side. The side sills are styled in “Black High Gloss”; a high-end chrome trim strip is incorporated here. Other areas that are enhanced by “Black High Gloss” are the roof, the upper part of the trunklid, the door mirror housings, and the door handles.

Like most R models, the interior will make an immediate impression on any passengers or drivers. Bucket seats that have inserts made of gray nubuck leather are in the front. The rest of the seats are upholstered in black Nappa leather. Each seat has the R logo is embossed and the seat seams and piping are in “Space Blue”.

The“Black High Gloss” that was already used on the exterior is also found in the interior as well. It contrasts with the dashboard accents and decorative elements on the steering wheel. There are R-specific design cues in the interior as well. For instance, the instrument cluster, with its central tach, and the auxiliary instruments in a pod above the center console both feature different markings and blue pointers. The door sill plates don the R logo. Meanwhile, brushed aluminum is used for all pedal caps. The fabric floor mats have blue-black double borders to match the blue-piped upholstery.

Unfortunately details of mpg, top speed, hp, etc., have not been released by VW yet. It is assumed that the Beetle R will offer even more performance than the Beetle Turbo (200 hp), similar to that of the Golf R and Scirocco R.

Still even with all these cool features, The Beetle R is still a concept. I expect much of these features and design elements to make it onto the production version though.