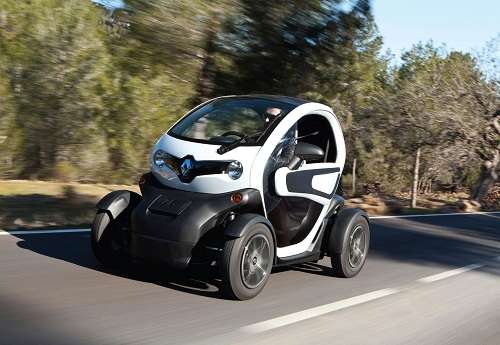 Electric Renault Twizy launches in the UK, will it be a sales success? [Video]

Renault Twizys, starting today, are now available to test drive at various dealerships all around the UK. Renault is putting it's focus for the Twizy primarily at dealers with larger suburban and urban populations. This is the car’s likely target market and driving usage. The rest of the brand’s official dealerships will have their demo and display vehicles by April 20th.

Renault claims the Twizy is “The World's Most Unique Production Vehicle.” They might be right as there are not many cars that look like a Twizy.

In keeping what the French automaker feels is a unique vehicle, they are launching a unique marketing campaign for the Twizy. The campaign features DJ David Guetta and his wife Cathy.

A new commercial entitled ‘Plug Into The Positive Energy’ has one of DJ Guetta's new songs “Alphabeat” playing set against a futuristic dance-club, ‘Party Station’, where the dance-floor generates the electricity to charge the Twizys parked underneath.

The ad is set to air on Britain's Got Talent tomorrow, and will be supported with online marketing efforts. There are two versions of the commercial, one is 30 seconds and the other is 60 seconds.

Pricing for the Twizy Urban model starts at £6,690 British Pounds which is equal to $10,700 US dollars. Renault leaves out an important component though, the battery!

At least the battery can be recharged using a standard three-pin plug in fairly quick three and a half hours. Renault claims it will cost around £1 or $1.60 US dollars to charge the battery. (The cost will depend on the energy supplier though and could range in price.) That isn't bad for an estimated driving range of around 60 miles (100 kilometers). Especially when you consider gas in the UK is around $8-10 per gallon.

By the way, the electric motor has around 17-horsepower and is limited to a top speed of 80 kilometers per hour, roughly 50 mph. This is the more powerful Urban model, so Speed Demons will have fun in this car! :)

The Twizy is a miniscule 2.34 meters long by 1.24 meters wide two-seater. If you have a lady friend, she won't be able to sit next to you. The driver and passenger sit in tandem, like a motorcycle (except a lot less cool because you are driving a Twizy!)

In all fairness, I think it's great when automakers try something different and new. But really what's the deal with the Twizy Renault? I mean...why would I buy a car called a Twizy? It also makes little sense that many people want to lease a battery. I wouldn't buy this car, and I wouldn't be surprised if Renault loses a lot of money on this because not many people want to buy this car either.

SDC wrote on May 3, 2012 - 6:48am Permalink
"where the dance-floor generates the electricity..." Not as Sci-Fi as you might think. Was Guetta/Renaultinspired by the Sustainable Dance Club whose idea is very similar and exists since 2006? Check this out: David Guetta inspired by SDC on Youtube. This video shows sequences of Guetta's new videoclip in comparison to a medley of promotion videos of SDC. Coincidence?