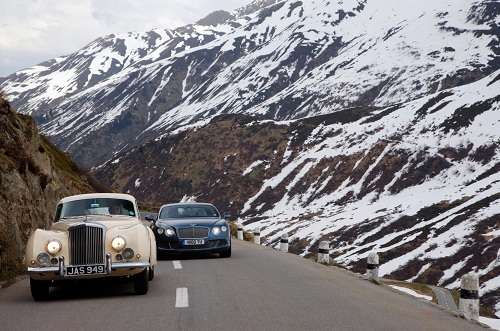 Bentley is taking two classic Bentley Blowers, as they are known, on the amazing 2012 Mille Miglia which spans over 1,000 miles.
Advertisement

Bentley is known for creating cars that combine speed with amazing comfort and luxury and has been doing so ever since they first starting building cars. To prove what sort of cars they make they are taking part in the 2012 Mille Miglia with two 4.5 liter Bentley Blowers. (Yes, I thought this was funny too!)

Despite both Bentley Blowers having a combined age of over 160 years, they are still in great working order and can drive pretty damn well. The 4½ liter Supercharged ‘Birkin Blower’ already successfully completed the Mille Miglia in 2005 and 2011 and is going for a third time this year.

The Birkin Blower was raced by one of the legendary “Bentley Boys” and 24 Hours Le Mans winner Tim Birkin. It is important to note that the original James Bond car was a 1933 Bentley. The reason Ian Fleming, author of the Bond novels, choose a Bentley was because of the Bentley Boys three consecutive victories between 1927 and 1930 at Le Mans. (Of course there was no 1933 Bentley, and this was corrected by Fleming in “Moonraker” saying Bond drove a 1930 Bentley.)

The Birkin’s companion car accompanying it on the Mille Miglia is one of 50 Blowers built for road use and still appears at Bentley events all over the globe. It started life in 1930 as one of the company’s first showroom demonstrators and is still performing its fair share of “test drives.”

“It is a privilege for the team to drive these remarkable cars at the Mille Miglia as they embody so many of the qualities that set Bentley apart from other marques and W.O. Bentley’s brilliance as an engineer.” commented Rolf Frech, Bentley’s Member of the Board for Engineering at Bentley. “We look forward to driving another thousand miles and setting a decent pace in the true Bentley tradition.”

Mr. French is leading the Bentley team at the c. How exciting it must for him to take part in the Mille Miglia with these Bentleys.

The 1954 company-owned R-Type Continental has also made the journey from England to Italy. Widely regarded as one of the most elegant Bentley’s every created, the R-Type was also the world’s fastest four seat luxury saloon back in 1952, able to hit a top speed of 115mph. (I wonder if it can still go that fast?) This year marks the Bentley R-Type's 60th Anniversary.

The best of Bentley’s past will be accompanied across Italy by two modern Bentley's as well. This includes the 6.0 liter W12 Continental GT coupe and the recently launched 4.0 liter V8 GTC convertible.

So it should be quite a fun experience for all the new “Bentley Boys” on the 2012 Mille Miglia.