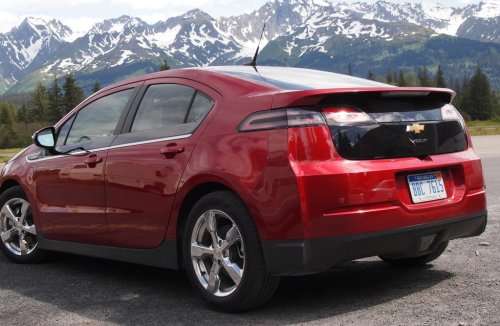 Despite Alaska's wild dangers, where a car can run out of fuel on highways, Chevrolet thought the Last Frontier state was a great place to showoff Volt’s capabilities.
Advertisement

Chevrolet took a small fleet of Volts to Anchorage, the largest city, and invited photojournalists to drive southeast 126 miles spanning 1.5 hours to Seward, with a stop in Girdwood along Alaska’s scenic, curving Highway I with its breathtaking views.

Alaskans value their pristine environment and are interested in electric cars, though travel to isolated villages is accomplished by boat or single engine aircraft fitted with skies or pontoons.

Chevy’s first stop was the dealership in Anchorage, where sales staff and customers got their first look at a Volt and a test drive. Chevy hosted 115 test drives in one afternoon and virtually everyone had the same questions – “what is Volt’s range, how does it work in different weather conditions, and when can I get one?” These are the same questions electric car buyers in the lower 48 are asking.

That last question is perplexing. In June, not one Volt rolled off the Detroit-Hamtramck plant’s floor because upgrades are being installed at the plant to ready it for the 2012 model year. The 2012 Volt will have new features to extend the Volt’s range and a less expensive model, with fewer accessories, will be added to the Volt lineup.

The plant is expect to begin production sometime in July and GM plans to produce a total of 16,000 Volts in 2011 and will add capacity to build the Ampera, an Opel sibling, for Europe. When Volt production stopped, Nissan’s LEAF powered ahead in sales figures.

Because of capacity, Chevrolet right now is only selling Volts in seven states, California, Connecticut, Michigan, New Jersey, New York, Texas and Washington, D.C. By 2012, the plant will have the capacity for a 50-state run, but that’s not good enough for one interested consumer.

“While I like that the Volt is taking the ev message to the great white north full of oil, why can’t I get one in Pa where 95% of the people drive less (sic) than 60 miles per day,?” asked Connie Nour Hinkle on Chevy’s Facebook page.

Chevy answered saying the 2012 model will be available in Pennsylvania in the third quarter of this year and orders are being accepted now.

Volt can travel between 25 and 50 pure electric miles on a signal charge, depending on how heavy the accelerator foot is, the terrain and temperature. Extreme temperatures affect impact battery efficiency. If more distance is needed, a backup 1.4 liter, 84 horsepower gasoline engine capable of 344-mile range, kicks in automatically when the battery is depleted, boosting the Volt’s “extended” range to 379 miles.

Commuters driving fewer than 25 miles round trip to work each day can just wave at gas stations along the way, but longer distances using the engine still plants you at the pumps to refresh the 9.3 gallon fuel tank. The trips to Alaska’s most populated region in the south of the state are within Volt’s range.