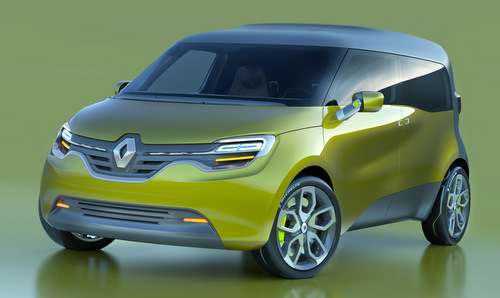 The dual-purpose and all-electric Renault Frendzy, which intends to combine a fully-functional work van with a personal family vehicle, will be on display for critics and consumers to evaluate at the 2011 Frankfurt Auto Show.
Advertisement

Renault will have a very interesting concept vehicle on display at the Frankfurt Auto Show called the Frendzy. The 100% electric Frendzy claims to have a split personality, with features that can make it both a dedicated work vehicle during the week and a playful family vehicle on the weekend. With an external 37-inch widescreen monitor that can display messages or advertisements to passersby on the outside, the Frendzy can relay information to clients or prospective customers like a work van with fixed graphics on the side.

Renault Frendzy is designed to work with the recently-launched BlackBerry PlayBook tablet which will plug into the center console of the Frendzy and integrate into its environment, meaning it will not only take on the color scheme of the Frendzy's interior (green during the workweek), but download whatever work that was done while in the Frendzy and then save it for later when the driver takes it out to leave the vehicle. If the Frendzy is used as a delivery vehicle, it can also take inventory of what packages are kept in the cargo area and even track their destinations with RFID chips, which will also help the driver calculate the best and most efficient delivery route.

When the car is to be used as a weekend family truckster, the whole color of the interior will change to a warm orange color, which is meant to evoke thoughts of camping. The 37-inch monitor that was an informative computer screen and mobile billboard during the work week is now an entertainment center for watching DVDs and playing video games.

The Frendzy is even designed differently on each side of the car to reflect its two responsibilities. The passenger side has a sliding door that incorporates the widescreen monitor, while the driver's side has a rear suicide door for easy entry and exit of children and pets. Neither side has center pillars, so that all available interior room and loading space is put to good use.

There's no word on whether the Frendzy will actually see production, but the concept car will be at the Renault display all next week at the Frankfurt Auto Show, starting September 15, 2011..