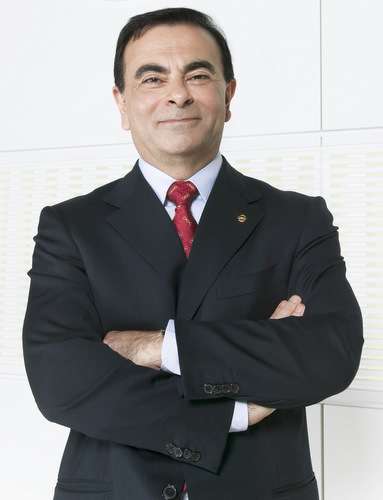 Nissan president and CEO Carlos Ghosn's bank account grew $11.46 million for the 2010 fiscal year, more than the CEO of any other automaker in Japan.
Advertisement

Nissan president and CEO Carlos Ghosn announced his earnings for the 2010 fiscal year as $11.46 million, making him the highest-compensated executive officer of any Japanese automaker. Both salary and share offerings in Nissan are accounted for in that figure, but his compensation as CEO of French automaker Renault, approximately $1.7 million, is not.

Ghosn, a 57-year-old Brazilian native, is also the highest-paid CEO of any Japanese company that discloses executive salaries. Japanese companies are required by commerce regulations to publicly state their leading officer's salary if it exceeds 100 million yen annually. The second-place CEO behind Ghosn is Sony's Howard Stringer, who made 863 million yen, or $10.66 million by today's exchange rates, in the 2010 fiscal year.

Ghosn is actually making less than the average automotive CEO, however, as Towers Watson & Co. has determined the average compensation of all automotive CEOs worldwide is about $15.3 million annually. Ford CEO Alan Mulally earned $26.5 million in 2010, making him the highest-paid automotive CEO in the world. For comparison, Toyota president Akio Toyoda took home a total of $1.8 million for 2010, while Honda president Takanobu Ito was paid $1.6 million.

Ghosn said in an interview that Simon Thomas, who was senior vice president of marketing and sales for Nissan in Europe, left this month for a job at Volkswagen. "Nissan is obviously targeted not just by Japanese companies, but foreign companies going after talent," he said. Takeshi Miyao, analyst at the Carnorama consulting company in Tokyo said "Western companies see the need to provide higher incentives to top management than Japanese companies do. They understand that well-performing management leads to good earnings results and they maintain adequate pay to make sure top managers don't leave for another company."

Nissan is Japan's second-largest automaker, and raised its global market share 0.3 percent through the 2010 fiscal year to a record of 5.8 percent. Sales in China provided the biggest boost as Nissan posted a 36% growth there, followed by 17% growth in America.

Patricia Elias wrote on July 15, 2011 - 1:36pm Permalink
As the CEO of Nissan and someone who would presumably take a pride in the company, I think he will be appalled by the recent behavior of the United Nissan dealership in Las Vegas NV. when sales reps, finance reps and even the GM made slanderous remarks to a customer.
Marilyn wrote on March 30, 2012 - 10:18am Permalink
I purchase a Nissan Pathfinder 2007 new,after a month I had a intake problem that never fix,it was just going back and forth to the dealer,til they wear me out so I stopped.Now my car just left my 3rd year the melt down has started the coolant system just shut my vehicle on the road,and had to tow this vehicle to the dealer it abou a month and I had to import the part because it was not instock,6 weeks later I took the Suv to service the aircondition and was told to go to the dealer to check my thermostst,its now 2 weeks later and the service department has just told me that they have been having a problem both the XTRAIL and PATHFINDER it has a over heating problem without showing up on the dashboard,so with that the (1) RADIATOR HAS TO CHANGE,(2)CYLINDER HEAD (3) CYLINDER GASKET (4 DECO KIT.This Suv cost me $60000.00 TRINIDAD DOLLARS I want the CEO Mr Carlos Ghosn to know that the vehicle they anr sending to my Country is defective,and I need to get value for my hard earned dollars.