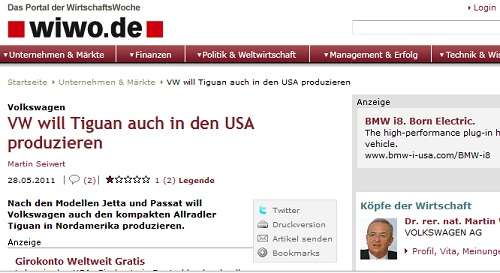 Volkswagen Tiguan May Be Built in Tennessee

German businesses magazine WirtschaftsWoche has reported that Volkswagen will soon be making a decision to produce the Tiguan in North America.
Advertisement

The VW Tiguan is a five passenger, front-wheel drive compact crossover vehicle designed to compete with the Honda CR-V, the Mazda CX-7, and the Toyota RAV4, and is currently manufactured in Wolfsburg, Germany.

Production is likely to be at VW’s new $1 billion assembly plant in Chattanooga, Tennessee, although it’s older plant in Puebla, Mexico is also a possibility. The move is seen as a way to reduce costs by protecting against a fluctuating exchange rate. Along with final assembly many parts and materials would be from US suppliers. Volkswagen has set a goal to surpass Toyota in worldwide auto sales, and lowering prices is part of its long-term strategy.

The Tiguan is powered by a 2.0 liter 4 cylinder, double overhead cam, 16-valve engine. The intake valve timing is varied by the engine management system for better efficiency and increased torque throughout a wider range, making it easier and more fun to drive. The turbocharged engine achieves 200 horsepower, 10% more than the Honda CR-V, but fuel efficiency is about 10% less. The retail price of the base model is currently $23,720 and two upgraded models are available.

The base S model has a 6-speed manual transmission with an Auto Hold feature, which prevents roll-back by electronically applying the brakes when preparing to move forward. A 6-speed automatic is optional on the S model and standard on the SE and SEL trim levels. Volkswagen’s 4MOTION all wheel drive system is optional on all trim packages.

The name Tiguan is a combination of the German words for tiger and iguana.

VW Job Seeker wrote on June 2, 2011 - 7:28am Permalink
Interesting how many jobs will VW factory in TN create. It's great that Volkswagen Tiguan may possibly be built in Tennessee. Does anyone know how many jobs will this create and when will they start hiring?
Ray Au wrote on June 10, 2011 - 8:45pm Permalink
Maybe the pices will fall for American buyers with local production. These same vehicles sell for us$38,000 basic in Australia. We have been ripped off in Australia on car prices by VW forever. Add accessories and us$50,000 is possible. I want your cheap and reasonable US prices and not the rip-off, dishonest crooked importers that we currently have.

Elon Makes a Cybertruck Statement With an Action, But Quiet in Words
Tesla's Record Month in China: Doubled Registrations in March 2021
END_OF_DOCUMENT_TOKEN_TO_BE_REPLACED