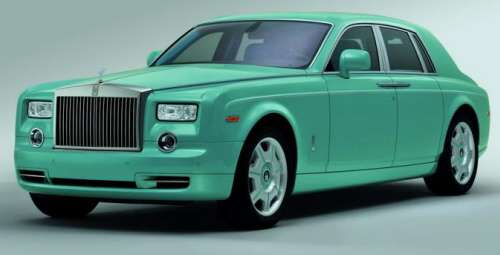 Rolls-Royce Motor Cars has come up with a new color for its Phantom: Turquoise. After it posted a picture of the car on a Facebook page, readers bristled, saying the brightly colored luxury car looks more gaudy than good.
Advertisement

A Bespoke Phantom pictured here and ordered from Rolls-Royce by a client in Qatar is the first to be finished in the new turquoise paint specially created by the Rolls-Royce Bespoke team at Goodwood, England.

Rolls-Royce said on a Facebook page post that the decision to make cars in this color was "inspired by the colors of the calm sea and sky of the Arabian Gulf region as well as by the precious stone."

This special Phantom also features turquoise leather inside its cabin -- right down to its leather-trimmed controls and steering wheel stalks, which complement the Marine White used for surfaces that include the dashboard veneer.

Most posters since Rolls-Royce made the post on Thursday said they didn't like the look of the new color on the Phantom. Comments ranged from "ew" (Imran Uddin) to "sacrilege!" (Pranay Soni) to "disgusting" (Jean Jacques Kasel) to "feeling seasick" (Mitch Clayton Cragg).

Because of the distinct color, Damian Greenwood observed: "Looks more like a Rolls-Royce for Tiffany's New York."

Samuel Overlie is in the minority. He said he would buy a turquoise Phantom, but gave it a backhanded compliment, not a full-blown endorsement. He'd purchase the car, he said, even though "it looks excellent and yet horrible at the same time."

Tim Nelson wouldn't be caught dead driving turquoise. He sees nothing elegant about this car's paint job, which one person derides as being "lavatory green, circa 1958." Nelson thinks this turquoise Phantom is so gauche the buyer had to be a Beverly Hillbilly. Nelson says this car in this color proves one thing: "Money doesn't necessarily come with taste."

Alexandru Murvai chides the naysayers. "C'mon people! " he said. "It's something different! I think it's OK to color our life!"

Another glass half full guy is Greg Tarby, who doesn't like the car but appreciates the workmanship. "I don't agree 100% with the color, but Rolls-Royce did an amazing job on it," he said.