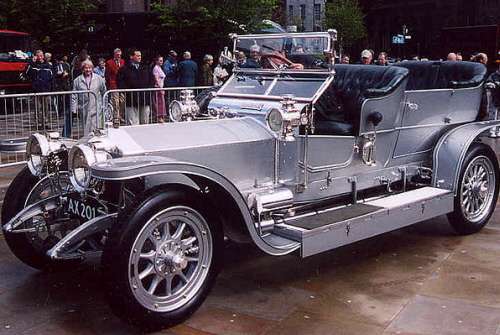 The 1911 Experimental Speed Car known as 1701 will lead 17 historic Rolls-Royce Silver Ghosts on Sunday from the Royal Automobile Club in Pall Mall, to re-enact the 1911 London to Edinburgh Top Gear Trial, which solidified the marque's reputation as a world-class luxury car.
Advertisement

The 1911 Experimental Speed Car known as 1701 will lead 17 historic Rolls-Royce Silver Ghosts (pictured) Sunday from the Royal Automobile Club in Pall Mall, to re-enact the 1911 London to Edinburgh Top Gear Trial, which cemented the Rolls-Royce reputation as a world-class automobile.

Cars will follow as much of the original route along the Great North Road as possible and will get to Edinburgh in two days.

The Speed Car was the first Rolls-Royce to exceed 100 mph. The historic cars in Sunday's cavalcade, comprised of models made from 1911 to 1922, will be supported by a new Rolls-Royce Ghost that was assembled at the Home of Rolls-Royce Motor Cars at Goodwood, West Sussex. The event is being put on by the 20-Ghost Club.

“Rolls-Royce has always stood for the very best engineering combined with refinement, luxury and, of course, hand craftsmanship and human endeavour. These qualities are the same today as they were 100 years ago," said Torsten Müller-Ötvös, CEO, Rolls-Royce Motor Cars. "We are delighted to support our friends at the 20-Ghost Club in this remarkably authentic re-enactment and look forward to welcoming them to the Home of Rolls-Royce at Goodwood after a successful Centenary Trial.”

The 2011 re-enactment will recreate the original trial in the greatest of details. That includes gear change gates being authentically sealed to show use of intermediate gears. The return journey will end Thursday in West Sussex, where the drivers will be rewarded with a Grand Afternoon Tea. The cars will line up again next Saturday (Sept. 17) at the Goodwood Motor Circuit Grid and then join the Revival Opening Parade lap.

Rolls-Royce offers these further race details, in a statement:

The 1911 RAC-observed London to Edinburgh Trial was a major test for Edwardian cars. The Trial allowed Rolls-Royce to demonstrate the performance, flexibility and economy of the Silver Ghost, particularly when compared to its arch rival, the Napier. At the same time it broadened the appeal of the car to a younger and sportier clientele, without deterring the traditional aristocratic customer who was at that time the mainstay of Rolls-Royce production.

No other car at the time could match this Rolls-Royce feat, with 1701 driving from London to Edinburgh and back using top gear only and averaging fuel consumption of more than 24 mpg. To prove that the original chassis had a normal back axle ratio and that the car had received no mechanical alteration, the car was then driven at Brooklands, achieving over 78 mph. Later, when fitted with a wind-cheating single-seat body, 1701 recorded a speed of 101 mph over the flying half-mile at Brooklands driven by E.W. Hives. Hives later became chairman of Rolls-Royce.