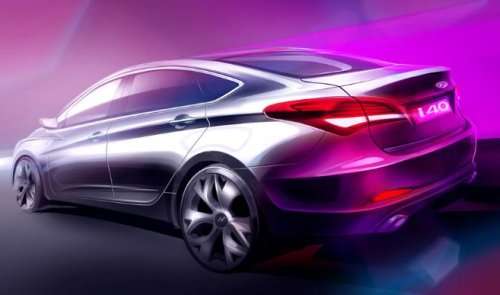 Hyundai's new brand ‘New Thinking. New Possibilities’ has taken effect with the launch of its new i40 Saloon, which will be broadcast at the Barcelona Motor Show, next week.
Advertisement

The Korea-based car company has chosen an ideal location for its launch since about 40% of cars sold in Spain’s aptly named “D-Segment” are in fact saloon cars. The Hyundai i40 is also said to be “likely to have a better standard specification than established rivals like the Ford Mondeo, and it will probably undercut them on price, too,” quoted car enthusiast and writer Jack Carfrae.

Allan Rushforth, Senior Vice President and COO of Hyundai Motor Europe, commented that "the launch of the saloon represents the next step of the i40's introduction to the European market, following the very positive reception for the i40 estate. The i40 saloon shares the same qualities found in the estate, including a dynamic design element, and broadens the appeal of the i40 to buyers in the D-segment."

This new ‘fluidic sculpture’ design is designed like a coupe with a large interior. The Hyundai i40 is said to have a European identity along with its designers and engineers at the European R&D headquarters of Hyundai in Russelsheim, Germany. This design has been said to be inspired by nature to create a dynamic exterior and has also been the inspiration behind other all new Hyundai models, such as the award-winning ix35 and ix20.

"We have used very strong, fluid lines from front to rear to give i40 a distinctive appearance," commented Thomas Bürkle, Chief Designer at Hyundai Motor Europe Technical Centre. "We wanted to move away from the typical three-box saloon and create a car that was in keeping with the sporty nature of the i40 estate."

The interior and exterior of Hyundai i40 Saloon have best in class dimensions for front head (1025mm), shoulder (1455mm), and leg room (1170mm). Fans will be in for a weekend of auto heaven with the Spanish Grand Prix the same weekend as the Barcelona Motor Show. The Hyundai i40 four-door saloon will reach UK showrooms in early 2012.

The world premiere of the i40 saloon will take place in Hall 8 at the Montjuïc Exhibition Centre at 12:20 Thursday May 12th in Barcelona Spain.