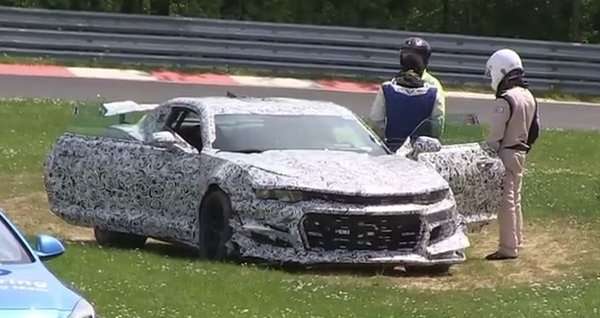 Wrecked Camaro Z28 was Back in Action the Next Day

Last week we brought you a video of what we believe was a 6th generation Chevrolet Camaro Z28 crashing on the Nürburgring and today, we have a video featuring Camaro Chief Engineer Al Oppenheiser giving a bit of detail on that accident – most notably pointing out that the car was back on the track the next day.
Advertisement

Last week, some spy shots surfaced showing what pretty much everyone in the auto industry believed to be the next Chevrolet Camaro Z28 testing on the Nürburgring. The next day, video showing the Camaro Z28 testing surfaced as well, but the most notable aspect of that video came towards the end – when the new super-Camaro slammed into the inside wall and came to rest in the grass.

That video quickly went viral as the hordes of internet know-it-alls who have likely never been closer to a road course than their Xbox argued over what caused the Camaro Z28 test session to go so horribly wrong. As expected, General Motors didn’t have anything to say about the Camaro crash video, but when Camaro boss Al Oppenheiser spoke at a huge car show at Rodgers Chevrolet in Woodhaven, Michigan this past weekend, he was willing to offer up a bit of information on the Nürburgring crash video.

He offered just a bit of information, but it is enough information to shed some light on the Camaro Z28 crash. Best of all, the guys from CamaroNews.com caught this discussion on video, so we can all hear what Al Oppenheiser had to say about the crash.

The Camaro Boss Speaks
When Al Oppenheiser headed to the Rodgers Chevrolet car show just a few days after the Chevrolet Camaro Z28 Nürburgring crash video surfaced, he had to know that he would face questions about the incident. Oppenheiser could have done what many industry bigwigs would do, simply stating that they cannot comment on what happened during internal testing. He could have just played dumb to the whole situation and had he taken that route, it wouldn’t have hurt his image or that of the Camaro. After all, most industry guys would have done whatever they could to avoid the subject and in most cases, that is what the higher-ups would want them to do.

However, Oppenheiser did address the video and while he didn’t exactly offer details as to why the crash happened – nor did he confirm that this was actually a Camaro Z28 test mule – he did offer some background on the Nürburgring testing that led to the now-infamous crash video.

Oppenheiser explained that the General Motors test team was at the Nürburgring for an industry testing session, when only automakers are permitted on the track. While the public isn’t permitted to attend these special track days, there are still places around the gigantic racing facility where people can view (and film) the on-track action. In this case, the people located at those four viewing positions around the track caught the mysterious Camaro zipping around the track…and crashing. The Camaro boss also pointed out that their track test drivers are highly skilled and fitted with all of the modern safety devices, including the HANS device.

Next, Oppenheiser explained that this was a fairly routine test session with the new Camaro, as the company was working on some components for future models. He explained that they use these track sessions to test different tires and different aero components, some of which will be featured on future vehicles and some of which will never make it to production. The way that Oppenheiser talked about the wrecked Camaro, it could have simply been a Camaro SS with a bunch of unique components added for track testing, but I think that we all know better.

Finally, Al Oppenheiser stated that the Camaro that we saw testing was “back on the road” the next day and since GM was in Germany to test this Camaro at the Nürburgring, we can guess that “back on the road” meant that they had the car back on the track. No information was offered on the scope of the damage, but he insisted that the damage was not as bad as it looked and that would lead me to believe that the carnage was purely cosmetic.

So, while we don’t know why the Camaro Z28 crash and we don’t even know for sure that it was a Z28 test car, but we know that the damage was minor enough that the team got the car back on the road by the next day. You can watch the whole video in the link below over at CamaroNews.com.