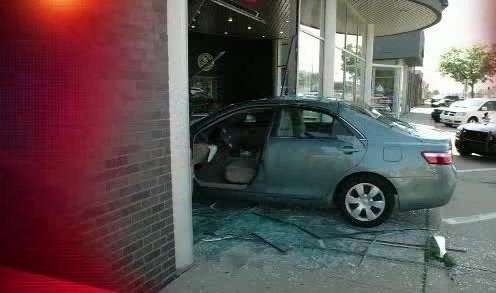 Just when Toyota’s problems centering around “unintended acceleration” seemed to be fading, a Birmingham, Michigan car dealership specializing in European exotics had a late model Toyota Camry slam through their front windows – damaging a limited edition Lotus and doing extensive damage to the business.
Advertisement

The driver of the Toyota Camry, who to this point has remained nameless, told WXYZ reported Frank Holland that her “accelerator got stuck”; slamming her Toyota sedan through the front of Birmingham, Michigan’s Auto Europe. The driver of the Camry and all of the dealership employees came away without any injuries but the runaway Toyota did hit a limited edition Lotus Exige – 1 of just 50 examples of the compact British sports cars in the United States.

While Toyota may contend once again that their vehicle was not at fault in this latest bout of unintended acceleration, comments from the manager of Auto Europe may prove to the contrary. Auto Europe’s manager told WXYZ that the accelerator may have been stuck, as after the Toyota slammed through the large glass storefront and into the Lotus Exige, the front tires of the Camry “kept spinning and spinning”.

This means that after crashing through the front of the dealership and into a Lotus Exige, the driver of the Toyota Camry either sat there with her foot buried to the floor or the accelerator of the Camry was hung up. There has been no indication as to whether or not the driver had the dreaded “wrong floormats” or if this is another one of Toyota’s phantom acceleration issues but in any case, it appears that Toyota’s unintended acceleration problems are alive in well.

This could come as a damaging blow to Toyota as the Japanese automaker prepares its case against a massive number of Toyota owners who are suing the company for injuries and economic loss due to the unintended acceleration issues across nearly every vehicle they’ve sold in the past 15 years. On top of that, this is another black eye for the Toyota Camry – a vehicle which held the distinction of being the bestselling car in American but with yet another “out of control” Camry, you have to wonder how long Toyota will be able to uphold their now-questionable reputation for quality.

Click here for a look at the video after the accident from Detroit’s WXYZ and stay tuned to TorqueNews.com as we continue covering this story; bringing you more information as it becomes available.

Image provided by Auto Europe, captured from the WXYZ video.

A big thanks to Amanda for the tip!!