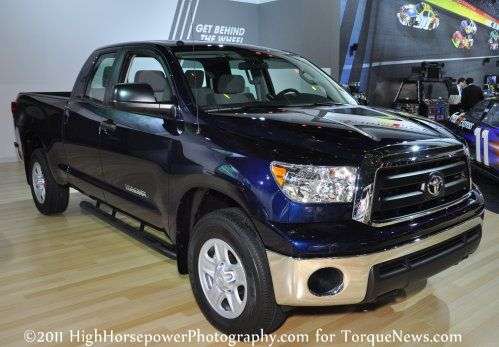 For the second time in less than three months, Toyota has issued a recall for tire press monitor system problems and like the one we brought you in March, this new Toyota recall pertains to select Tundra pickups.
Advertisement

This new Toyota Tundra recall pertains strictly to trucks distributed by Southeast Toyota Distributors, with 1,629 pickups affected across the 2007-2011 model years. In these Tundras, the tire press monitor system (TPMS) has not been calibrated properly and because of this, if one or more tires have an air pressure level that drops below the normal threshold, the warning light may not come on. Since the driver will not be notified of the low tire(s) by the TPMS, the likelihood of driving on dangerously low tires is increased along with the chances of an accident.

This problem with the Toyota Tundra TPMS calibration causes these 1,629 trucks to fail to comply with the Federal Motor Vehicle Safety Standard #138 which requires vehicles equipped with such a system to notify the driver in the event of a low pressure situation. Because of this failure to comply, Toyota is forced to issue this second recall for tire pressure system failures.

The Toyota recall announcement in March which also included the Tundra (click here for more on that original recall) pertained strictly to vehicles that had been equipped with different tire and rim sizes than what were installed at the factory. In a great many of those vehicles, dealerships fitted the vehicles with optional rim and tire packages without recalibrating the TPMS before they were sold. This recent announcement by the NHTSA doesn’t mention any optional rim or tire changes but rather, this sounds like it is strictly a calibration issue from these trucks from Southeast Toyota Distributors. Toyota also recalled 51,000 2011 model year Tundra pickups in late April for driveshaft problems (click here for more on that).

*Update - TorqueNews spoke with a representative of Toyota today who explained that this new Tundra recall is indeed similar to the one announced in March, with dealership option wheel/tire combos at fault for the TPMS problem. Like those recalled in March, the recently recalled Tundras were fitted with wheel/tire combinations after production but prior to being sold that caused the TPMS issue but these vehicles were not involved in the original recall in March...so while this recall is very similar to the one earlier this year, the 1,629 pickups recalled most recently were not included in the recall earlier this year.

The new Toyota Tundra recall is expected to begin later this month, when the owners are asked by the automaker to return (again) to their local Toyota dealership where a technician will recalibrate the tire pressure monitor system. Toyota doesn’t state how long this will take –especially depending on how long of a line there is for the technicians doing recall work, - but provided that the wait to get into a service bay isn’t too long, the repair should be pretty quick and easy.

It should also be pointed out that any dangers of a tire pressure monitor system can be avoided by buying a $5 tire pressure gauge and figuring out how it works.