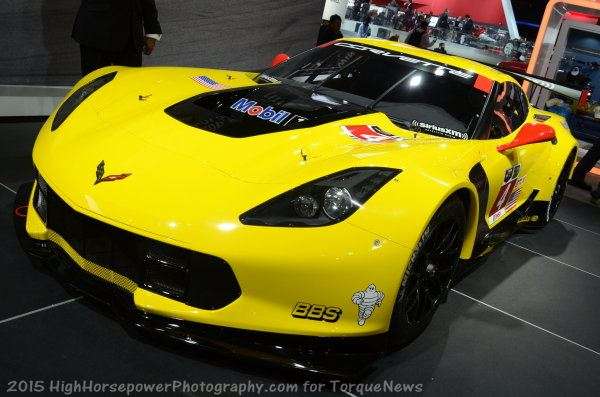 The official entry list for the 2015 24 Hours of LeMans endurance race has been announced and Chevrolet Corvette fans will have three teams to root for in this year’s race – including two teams in the GTE Pro class and one team in the GTE Am class.
Advertisement

Each year, the 24 Hours of LeMans race in France is arguably the biggest event of the year for the endurance racing world and in the production-based GTE classes, the Chevrolet Corvette is a regular frontrunner. The Corvette Racing teams that run in the Tudor United Sports Car Championship here in the US finished 2nd and 4th in the last year’s running of the race, and it has been widely expected that those two teams would be back for 2015. With today’s announcement of the official 2015 LeMans entry list, it has been confirmed that the Corvette C7.R race cars that dominated the Rolex 24 last month will be battling for the GTE Pro class win while a new Corvette entry – campaigned by Larbre Racing – will compete in the GTE Am class in a third Corvette C7.R.

The Drivers
There were two Corvette C7.R teams in the 2014 24 Hours of LeMans race, with the #73 car of Jan Magnusson, Antonio Garcia and Jordan Taylor claiming the second spot in the class while the #74 car of Tommy Milner, Oliver Gavin and Richard Westbrook finishing 4th in class. Five of those six drivers are back in a Corvette C7.R for the 2015 race, but the teams have been mixed up a bit.

First off, the Corvette Racing teams have changed their numbers from 73 and 74 to 63 and 64. Magnusson and Garcia will still pilot the #63 Corvette, but they are joined by newcomer Ryan Briscoe. Briscoe has made one previous start in the 24 Hours of LeMans a few years back in one of the prototype classes, but this is his first LeMans in a production-based GT car. The #64 Corvette will still be piloted by Milner and Gavin, but Jordan Taylor will jump over from the Garcia/Magnusson team to be the third driver instead of Richard Westbrook.

Finally, the new Corvette C7.R on the block is being brought to LeMans by Larbre Racing. This team has campaigned prototype racers in past years, but this year they will bring out a brand new Corvette to compete in the GTE Am class. Paolo Ruberti and Gianluca Roda are two of the drivers, but the third has not been officially announced.

The Competitors
The for #63 and #64 Corvette C7.R teams in GT Pro, they will have to be two Ferraris, two Porsches and a trio of Aston Martins in order to stand atop the LeMans podium. The toughest competition will likely come from the #51 Ferrari 458 Italia of Italian AF Corse race team. This team won the GTE Pro class at the 2014 LeMans race, but considering how strong the Corvettes looked last month at Daytona, the C.R teams are a favorite in France.

Things will be quite a bit tougher for the #50 Corvette C7.R in their first attempt in the GTE Am class. Not only is this Larbre’s first year in GTE Am, but they will be competing against all of the front-running teams from the 2014 LeMans race – and that experience is likely to be a big factor.

ken ahrens wrote on February 5, 2015 - 2:22pm Permalink
Go VETTE!!!!!!!
Rick wrote on February 10, 2015 - 10:04am Permalink
Team Labre has been running this race for years, so it's only natural that they'd upgrade to the C7R. What's amazing, is that GM (read: Fehan) is allowing it to happen so soon. Also, I believe that Ricky Taylor has driven for them in the past, so we might see him as the thrid driver...