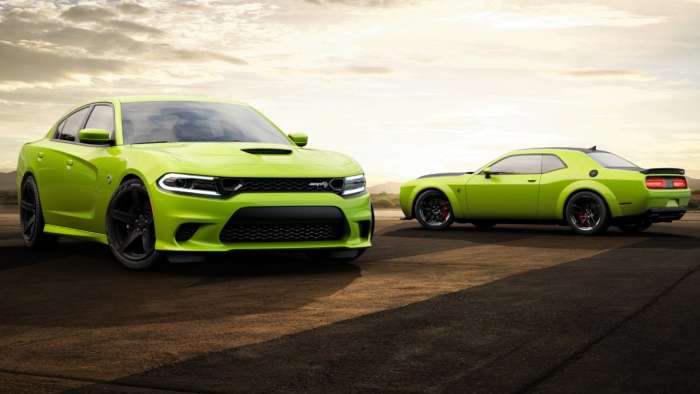 Sublime Returns to Dodge Challenger, Comes to Charger for 2019

Sublime was the most popular color for the 2015 Dodge Challenger SRT Hellcat and this afternoon, the high performance brand announced that the bright metallic green hue will be returning for the 2019 model year, but not just for the Challenger, as this color will be offered with all Charger trim levels as well.
Advertisement

Dodge announced this afternoon that Sublime will return as a late availability color across the entire range of trim levels for both the Challenger and Charger for 2019. This is the first time that the Challenger has been offered in Sublime since 2015 while also marking the first time that the current generation Charger has been offered with the popular light green paint, with Sublime last being offered on the high performance sedan back in 2007.

History of Sublime
Sublime was introduced by Dodge back in 1970, at which point it was offered on every model aside from the Polara and Monaco. The color returned in 2007 for the Dodge Charger R/T Daytona while the modern Challenger first got this striking bright green in 2015.

The Dodge Challenger SRT Hellcat was introduced for the 2015 model year and with FCA hoping to sell at least 5,000 units, the company was shocked to sell 7,168 examples of the supercharged muscle car for that first model year. Of those 7,168 Hellcat Challengers sold for 2015, 1,327 were painted Sublime, making the bright metallic green hue the most popular color for that year while also being a popular choice for non-Hellcat buyers that year.

Sublime was removed from the Challenger Hellcat option sheet when the 2016 models arrived and while Green Go and F8 Green have been offered since then, Sublime has not returned.

That all changed today, as Dodge announced that Sublime is returning for the 2019 Dodge Challenger, but unlike the 2015 model year, this popular green paint choice is will be available on the 2019 Charger as well.

“Our Dodge//SRT muscle cars give our customers what they want, an incredibly wide variety of performance models and high-impact color options. Whether it’s Sublime paint, all-wheel drive capability or 797 horsepower, Charger and Challenger stand out,” said Steve Beahm, Head of Passenger Car Brands—Dodge//SRT, Chrysler and FIAT - FCA North America. “By bringing back a high-impact color like Sublime across the 2019 Challenger and Charger lineups, we’re continuing to give our enthusiast customers another way to make their muscle cars even more unique when they showcase the legendary Dodge performance attitude.”

2019 Sublime Muscle Cars
Starting in February, those customers ordering a 2019 Dodge Challenger or Charger in any trim level will be able to order Sublime. When these cars begin hitting lots, it will mark the first time that Subline will be available on the Charger Scat Pack, the Charger Hellcat or the Challenger Hellcat Widebody while 2019 will introduce the first Sublime Challenger T/A since 1970.

Other “high impact colors” for the 2019 Challenger and Charger lineup include B5 Blue, Go Mango, F8 Green, Plum Crazy and TorRed, all of which are available across all trim levels. Those are all available now, while Sublime will officially be available for ordering in February and it sounds as though this will be a no-cost paint option.

The 2019 Dodge Challenger and Charger will both be on display in Sublime at the upcoming Chicago Auto Show.