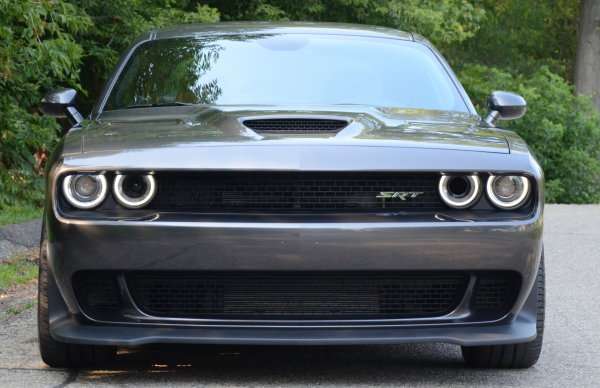 A chart with the production numbers for the 2015 Dodge Challenger SRT Hellcat popped up on my Facebook wall today with a Hellcat.org watermark, leading me to believe that these are the official production numbers by color and transmission for the 707hp Mopar muscle car.
Advertisement

First, the production numbers discussed here are not official figures from Dodge or the Chrysler Group, but they come from a chart that appears to have been created for the enthusiast community Hellcat.org by member PLMCRZY. That site is chock full of great information on both Hellcat cars and with some staff members of the site having obvious insider access to non-public records, I am inclined to believe these numbers to be true.

2015 Hellcat Challenger Production Totals
According to the folks at Hellcat.org, there have been 7,168 examples of the 2015 Dodge Challenger SRT Hellcat built since late last year. Of those, 3,748 were fitted with the heavy duty 8-speed TorqueFlite automatic transmission while the other 3,420 had the 6-speed manual transmission.

2015 Charger Hellcat Production
In picking through the posts on Hellcat.org, I haven’t been able to find similar information for the Hellcat Charger, but those in the know suggest that production numbers for the sedan could be in the 1,000 range. The Charger production started later than the Challenger and because of the insane popularity of the Hellcat Challenger, the Charger production was greatly reduced. Even though the sedan could outsell the coupe, Dodge has been unable to roll out 707hp Chargers at a high enough rate to fill the long list of orders.

Even without strong Charger Hellcat numbers, the Challenger figures alone are impressively high. There were rumors when the Hellcat Challenger was introduced which insisted that just a few thousand would be made, but we know that no less than 7,100 units were built. With numbers these high, Dodge will almost certainly announce the official figures for 2015 Hellcat production – at which point we will make any revisions that are needed along with reporting the production numbers for the most powerful sedan in the world.

Kenneth Forrester wrote on September 23, 2015 - 9:32pm Permalink
378 Torred 6 speed manual. I wonder if one can find out what the V I N is on the last Challenger Hellcat.
nobody wrote on September 28, 2015 - 2:19am Permalink
Last 2015 Challenger Hellcat built: 2C3CDZC96FH905657 (from hellcat.org)
Kelly wrote on March 28, 2022 - 1:42pm Permalink
We know our Hellcat was manufactured on September 11, 2015. The vin is a couple hundred higher than the one stated above. We were told ours was the second to last or very last built that year. Any help? I’m doing this for my hu, so patience with me please.
william wrote on October 24, 2015 - 9:58pm Permalink
There bis no way that vin is possible.....mine is 887766 and was built sept11 . Which would mean they built 17000 cars in 6 weeks........nah I don't think so
nobody wrote on October 26, 2015 - 2:13pm Permalink
If you would do a little research, you could find out that the Brampton plant builds nearly 1000 cars per day. The last 6 digits of the VIN are unique for all models (not just the Hellcats), so 887766 might be a Hellcat and the next 887767, might be a Scat Pack and the next might be a Chrysler 300 or a Charger. Also the VINs are not produced in sequence. I have posted accurate info including the source. Believe it or not. The owner of the last Challenger Hellcat produced has username "sahak" at hellcat.org.
nobody wrote on October 26, 2015 - 2:26pm Permalink
BTW - How are you enjoying your Granite Crystal 6-speed? I have the 6-speed as well that I have owned about 1 month now.
nobody wrote on October 26, 2015 - 2:36pm Permalink
The VIN of the first Challenger Hellcat is 2C3CDZC94FH700001. By your logic, the VIN you posted is also not possible. There is no way they produced (887766-700001) over 100 thousand Hellcats.
David Larson wrote on October 21, 2021 - 5:28am Permalink
There is somthing up with the vins i havent figgured out yet i think the first didgit in the row of 6 numbers for numerical order is possibly a substituted check number instead of them putting a zero so it is my thought that there are two check numbers because each year they never made over !00,000 cars (challengers) i think the average number was around 70 thousand made so ithink it is a check didget or it may represent what line it went down possibly for identifying them easyer for a recalls just a guess havent found valid answer yet but i am almost certain the first number of the 6 sequential number dont count makes sense if you look at multiple vin numbers and it is possible for that Hellcat vin 887766 both begining # 8s are check didgets because there shouldnt have been more than 8000 hellcats produced so i think in the example the hellcat is the 7,776 th made
Kelly wrote on March 28, 2022 - 2:00pm Permalink
Ours also built September 11. 905846.
Kenneth Forrester wrote on October 29, 2015 - 11:43pm Permalink
My Hellcat had a born date (if you will) of 9/9/15, last of VIN is 887801.
Jimmy Wilkerson wrote on October 30, 2015 - 12:19am Permalink
I wonder how many of the 573 Redline Red have a black hood with red/black leather interior like mine?
nobody wrote on October 30, 2015 - 2:01pm Permalink
22 total. (8 of them are 6-spd manual w/ black wheels, 12 are 8-spd automatics with black wheels, 2 are 8-spd automatics with brass monkey wheels). There is a chart with all this data at hellcat.org.
Lynn haynie wrote on November 24, 2015 - 4:41am Permalink
I have a sublime Hellcat with the automatic and a sunroof. Because of issues with the sunroof for nearly the entire production run, I was wondering how many of these would be out there?
nobody wrote on November 24, 2015 - 9:09am Permalink
There are only 18 sublime Automatic Hellcat Challengers with sunroofs. There is only 1 sublime Manual Hellcat Challengers with a sunroof. I cannot post a hyperlink in this comment, because hyperlinks are not allowed. However, all this statistical data is available at hellcat.org. The title of the thread which contains the charts is "2015 Dodge Hellcat final production totals and stats".
nobody wrote on November 24, 2015 - 9:12am Permalink
I'm not sure why, but I believe I have read that most or a lot of the sunroofs went to Canada.
CYRUS C COPENHAVER wrote on December 24, 2015 - 12:00pm Permalink
GRANITE OVER BLACK AND RED 2015 SCAT PACK 392 SHAKER, A/T AND ROOF. VIN:2C3CDZFJ3FH923779. CAN ANYONE PLEASE TELL ME HOW MANY WERE BUILT? THANK YOU....
Amber Denzel wrote on October 22, 2016 - 5:32am Permalink
I have a 2015 A8, billet siver, matte black hood, Nav. Any idea how many were made with the same specs?
Steve wrote on November 26, 2016 - 6:01pm Permalink
I got 2 Challenger Hellcats. The 2nd one the auto in Sublime arrived August 22. Vin # 909956. One of the last ones I'm guessing?
Larry Harris wrote on November 2, 2017 - 12:57pm Permalink
I have Hellcat vin# C23CDZC96FH716040 and I was told it was born Nov. 15 2014 I am trying to find out what the production number is since they are not consecutive order
Mike Roncato wrote on May 1, 2018 - 2:47pm Permalink
My Challenger was completed and shipped from Brampton on 11-07-2014 @12:59 PM. as per the shipment sheet. My vin# is 2C3CDZC99719630. It was delivered to Suburban Dodge, Jeep, Ram in Troy Michigan on 12-1-2014 and I drove it home on 12-3-2014. That day it was sunny 45 degrees and no snow. Put in the garage and did not come out until April 1st 2015 and had fun ever since. The car today has 15000 miles and has never been in the rain or snow.
Dale robbins wrote on December 16, 2017 - 11:49am Permalink
Anyone know how many all white 2015 srt challenger hellcats built?
[email protected] wrote on March 17, 2018 - 7:45pm Permalink
2015 Hellcat production info.
Bill Horstman wrote on April 16, 2020 - 8:13pm Permalink
I was told I have a 1 of 1 2015 hellcat challenger white black hood 6 speed tan or buckskin interior any info

Tesla Contemplates A New Strategy for China Retail even As Sales Boom
Jay Leno on Elon Musk & EVs: “I Think He Should Get ... Credit"
END_OF_DOCUMENT_TOKEN_TO_BE_REPLACED