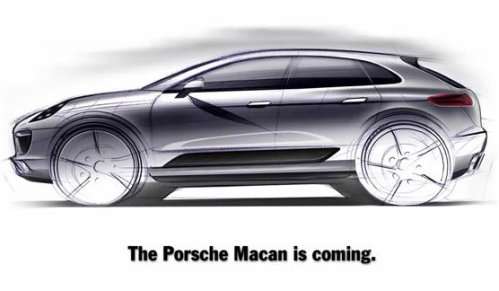 We have known for some time that Porsche has been hard at work on the new Macan midsized SUV but a recent report indicates that the new Porsche sport ute will make its grand global debut at the 2013 Los Angeles Auto Show – with a price that could start in the low $40k range.
Advertisement

This newest information on the Porsche Macan midsized SUV comes from British site AutoExpress and they acquired said information from an unnamed Porsche insider. According to this insider, the Porsche Macan will make its formal debut this November at the 2013 LA Auto Show with the first units expected to reach showrooms in the spring of 2014 which means that the Macan will likely be a 2015 model year vehicle.

When the 2015 Porsche Macan arrives, it will ride on the same chassis as the Audi Q5 but to differentiate itself from the popular Audi midsized SUV, the Macan will feature engine options, suspension tuning and an interior layout that is all its own – in addition to having an exterior design that leaves no question that it is a Porsche brand vehicle through and through. Among these engine options will likely be a hybrid configuration and possibly a diesel joining the standard gasoline engine. I should point out that the diesel powered Macan is almost guaranteed for the European market but it is unclear whether American buyers will get a chance to buy a diesel Macan – at least right away. Based on the sales of the gasoline powered Macan SUVs in the US and the continued growth in sales of diesel passenger vehicles, a diesel engine could very likely be offered but it may not be an option in the US when the vehicle is launched. Over time, we also wouldn’t be surprised to see a higher performance Macan possibly wearing the S, GTS, Turbo or Turbo S badges although in the early going the new model might be devoid of a proper high performance drivetrain option.

AutoExpress also discusses pricing a bit and while their numbers are all stated in British Pounds, the expected price in Europe of £36,000 gives us an idea of what American buyers can expect to pay for the 2015 Porsche Macan. When using direct current conversion rates, £36,000 would be around $54,500 US dollars. That is more than the $49,600 base price of the Porsche Cayenne so we know that is not a realistic figure but when we take things one step further – looking at not just the conversion rates but also the British and American pricing of the Cayenne – we would expect that the Macan would have an entry level price starting in the low to mid $40,000 range. Even with a price on the upper edge of that scalr (say $45k), the Macan would still be about 10% less expensive than the base Cayenne. More importantly, this low to mid $40k price range would make the Macan comfortably the least expensive model in the Porsche lineup so in addition to a new model naturally attracting new buyers, the low price of the Macan will likely attract buyers who previously couldn’t afford the price of most Porsche models.

I have had the pleasure to log a couple thousand miles in an Audi Q5 S line and based on how much fun that model was to drive in almost every situation – I fully expect that the Q5 platform with a sportier suspension setup and more power will be a total blast to drive. More importantly, this is a platform that will most certainly offer the kind of luxury performance driving experience that a modern Porsche buyer demands from his or her new vehicle. When you add in the facts that the Macan will likely be the most fuel efficient vehicle in the Porsche lineup while also being the least expensive – this midsized SUV could help to really bolster the brand’s sales numbers in the US and around the world.