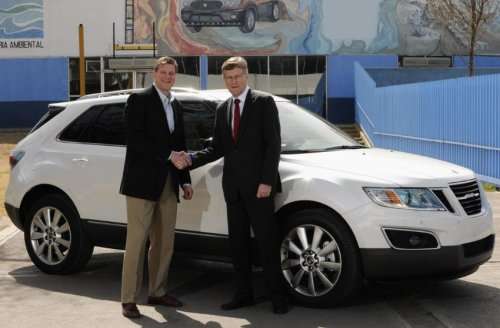 It has been an unfortunately exciting year for Saab and new parent company Swan with an incredibly valiant effort to reincarnate the Swedish automaker under new ownership but it was announced this morning that Saab has officially been sold to Pang Da and Youngman Lotus – the two Chinese firms that were set to invest in Saab to help it survive.
Advertisement

This announcement comes as a huge surprise as Pang Da and Youngman each made their own separate buyout offers earlier this week – offers which enraged Saab and Swan management so deeply that the Swedish automaker announced that they were cancelling the multi-million dollar investment deal announced earlier this year. Saab called the offers from the two Chinese firms “token” offers, immediately announcing that they (Saab) were calling off the investment deal with both Chinese companies, stating that the slow payment caused them to terminate the original memorandum of understanding. However, according to the parent company, Swan has agreed to sell Saab and Saab Great Britain to Pang Da and Youngman Lotus with yet another memorandum of understanding.

The problem for Saab and Swan is that same that it was before, as this latest agreement is still subject to approval by the Chinese government. The Chinese government was the reason that Hummer did not get sold by GM years ago as well as shooting down previous investment attempts by Chinese firms in Saab. However, with the agreed upon price for Saab to Pang Da and Youngman being an incredibly low $140 million US dollars – perhaps the Chinese government will recognize this deal as a good one for their local economy. While it seems like a great deal to be able to buy an entire automaker for just $140 million dollars, it should be kept in mind that Saab still owes hundreds of millions – if not billions of dollars to all sorts of groups around the world. Included in this are massive amounts of unpaid debt to their suppliers and a very sizeable outstanding loan from the European Investment Bank. Saab has also put themselves in fairly bad standing with their labor unions and worst of all, the company has built a car since the first quarter of 2011.

Industry analysts believe that to get Saab from where they are today to the point of being able to resume “normal” operations, it would cost somewhere between $800 million and $1.5 billion so even with the low purchase price of $140 million, the Chinese government may not approve this new deal. The Swedish government administrator appointed to help see Saab through their government-protected reorganization process has reportedly pulled his request for protection to be dropped so the company will likely be protected from its creditors until the sale to Pang Da and Youngman is completed – if it is permitted by the Chinese government.

The sale of Saab to these deep pocketed Chinese firms could very well save the struggling automaker, thus opening a new chapter in the incredible saga of the Swedish brand but if the Chinese government steps in and puts a stop to the sale – Saab will likely be forced to face a multitude of bankruptcy claims from creditors and their labor unions.

This truly remarkable story is likely only heating up so we can expect more news in the coming weeks. TorqueNews will continue to follow the Saab story, bringing you any updates as they become available!

Tsingshan's Threat to Tesla: EV Maker Is In Battery Crosshairs
Tesla-Funded Research Reveals One of The Biggest Mysteries of EV Battery
END_OF_DOCUMENT_TOKEN_TO_BE_REPLACED