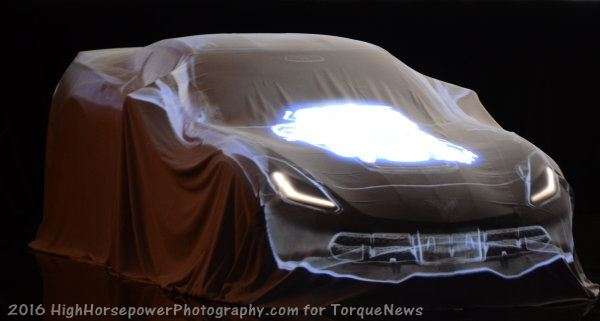 Rumormill: There Could be a 750hp Corvette Engine in the Works

There are rumors that the long-awaited mid-engine Chevrolet Corvette will debut at the 2018 Detroit Auto Show and a new rumor suggests that it will feature a new supercharged engine with somewhere in the area of 750 horsepower – possibly making it the most powerful American production car of all time.
Advertisement

However, based on an interesting discussion between a few folks who work in the auto industry, it looks like GM might be cooking up a new engine for the Corvette lineup – one which will comfortably overpower the Dodge Hellcat Hemi.

Rumors of a 750hp Small Block Chevy
As we all know, automakers don’t like to talk about future products until they are good and ready, and in the case of a rumored engine for a rumored mid-engine Corvette, GM most certainly isn’t interested in offering any insight. This information comes strictly from a few industry sources with the most reliable being a friend of mine who recently had a talk with a friend of his – who happens to work for GM.

During that discussion, the GM employee was telling my friend about an engine that they are working on – a supercharged engine intended to power the new super-Vette. There was no mention of a mid-engine setup, but this insider claimed that he was familiar with a project to build a new top of the line performance engine for the Corvette and Camaro. According to this insider, the goal for this engine was 750 horsepower for the Corvette with slightly less power in the Camaro.

Keep in mind that over the past year, we have discussed a possible rebirth of the LT5 engine name. The LT5 was best known for powering the C4 Corvette ZR1, during which time it was a groundbreaking engine and one of the most powerful on the market. GM trademarked the LT5 name at the same time that the protected the LT4 name and since then, it has been speculated that the LT5 would power the next big-power Corvette. Based on this new information, I believe that the engine being discussed could be a new 750hp LT5.

Again, this information is 100% unofficial, coming from a discussion between two engineers having a beer, but my friend assured me that this guy was very familiar with the project – enough so that he has been telling people not to buy a Hellcat car because GM will have an answer very soon. Needless to say, a Corvette from this generation or the next with 750 horsepower would set a new bar for the American auto industry, but with the expectation that the mid-engine Corvette won’t debut until early 2018 – it could be more than a year before we get solid information on this engine.

Of course, the other possibility is that the super-Vette being discussed is a new variation of the C7 Corvette rather than the next-gen model. There has been speculation that GM would roll out a C7 with greater performance capabilities than the current Corvette Z06, and a 750hp engine would certainly be a good place to start.

Should GM really roll out a 750 horsepower Corvette, it would give FCA even more of a reason to roll out the rumored Hellcat Hemi with 850 horsepower…so whatever GM is working on will most certainly stoke the flames of the current horsepower war.

Thanks to the friend who offered up the details of this conversation. You know who you are!

craig brustad wrote on July 25, 2019 - 9:51am Permalink
the 750 HP none supercharged engine is already here in plain sight,look at the roadster shop a hot rod shop that is selling the 32 valve v8 . built by mercury marine/with gm involved it is done.