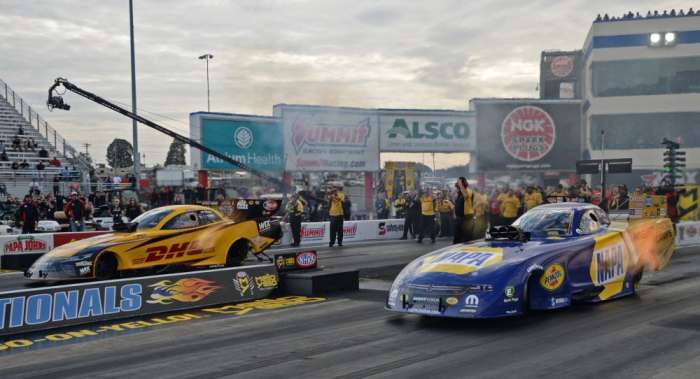 Ron Capps and his Don Schumacher Racing Dodge Charger R/T funny car grabbed their third win of the 2018 this past weekend in North Carolina, moving him into the third spot in the championship battle with just two races left on the season.
Advertisement

This past weekend, the teams of the NHRA Mello Yello Championship Drag Racing Series headed to ZMax Dragway in Concord, North Carolina for the Carolina Nationals. This was the third-from-last event of the 2018 season for the funny cars, so the Don Schumacher Dodge Chargers, the John Force Chevrolet Camaros and the Toyota of JR Todd all came into ZMax with their eyes on the big picture. Winning is always important, but with only three chances left to pile up points, these are all key races on the schedule.

Eliminations
In the first round of racing, top qualifier Tommy Johnson Jr lost to Dave Richards in a shocking upset, opening up the field for the rest of the event. Championship frontrunners Robert Hight, JR Todd, Ron Capps and Tim Wilkerson all won as well, while Courtney Force lost to Cruz Pedregon. Todd’s Toyota was the quickest car in the first round with a 3.874.

In the second round, Dave Richards lost to John Force, JR Todd beat Cruz, Tim Wilkerson beat Matt Hagan and, in what was the biggest run of the round, Ron Capps knocked out Robert Hight. Capps was the quickest car in the second round with a 3.889.

In the semifinals, Capps and his Charger beat Wilkerson and his Mustang, while John Force and his Camaro lost to Todd in his Toyota Camry. Todd was the quickest car, running a 3.891 to Capps’ 3.903, giving the Camry driver lane choice in the finals.

In the final funny car run at the 2018 NHRA Carolina Nationals, JR Todd held the starting line advantage (.048 to .074), but when his Toyota ran into troubles mid-run, Capps and his Charger cruised to the big win with a 3.890 at 331 miles per hour.

Championship Standings
After the Carolina Nationals, Robert Hight and his Chevrolet Camaro hold the top spot in the funny car championship race, leading JR Todd and his Camry by 11 points. Ron Capps and his Charger are 109 points back in third and Tim Wilkerson and his Mustang are 111 points out of the top spot. With two races to go on the season, the championship is still up for grabs, but at this point, Robert Hight and JR Todd just need to keep going rounds to pull away from Ron Capps to make this a two-driver race for the title.

For Capps to have a real shot at the title, he will have to outlast Hight and Todd at the next two events by a reasonable amount. However, if those Camaro or Camry drivers should struggle in the final two events and Capps or Tim Wilkerson can make it into the late rounds, we could have four drivers with a real shot at the funny car title at the season finale in Pomona.

If nothing else, we have an interesting battle including each of the four brands in the funny car class with just two races left on the season and that is rare in the modern era of drag racing.