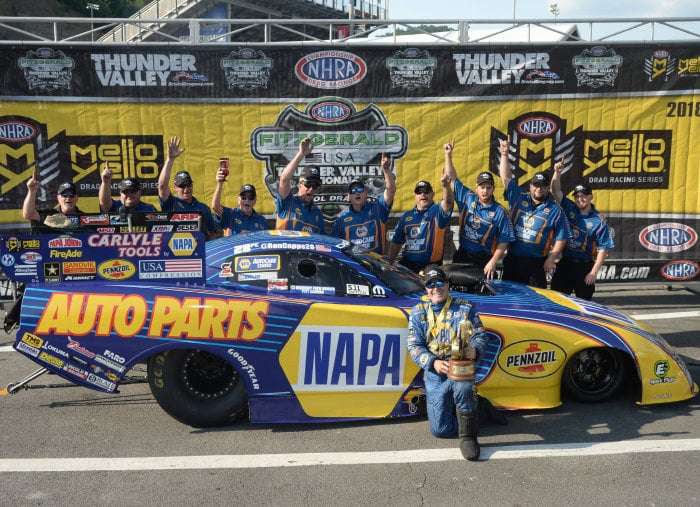 2018 has been Ron Capps’ worst season in the past few years, going winless through the first ten events, but he drove his Don Schumacher Racing Dodge Charger funny car to his first win of the season this past weekend at the Fitzgerald USA NHRA Thunder Valley Nationals.
Advertisement

This past weekend brought about the eleventh stop on the 2019 Mello Yello Drag Racing series and coming into this race, Ron Capps and his Dodge Charger funny car hadn’t been to the winner’s circle yet. By this point in 2015, Capps already had two wins. In 2016, he won four of the first eleven races and in 2017, he won half of the races by this point in the season, but coming into Bristol, Capps was winless on the season. He has run well enough to position himself in the 5th spot in the championship standings, but it is hard to win titles without winning races and for Capps, that road to the title took its first major step in Bristol.

Qualifying
Ron Capps and his fellow Dodge Charger racers from Don Schumacher Racing got off to a great start, with all four drivers turning in a top-seven run in the first round of qualifying, but it was Bob Tasca III in his Ford Mustang in the top spot.

In the second round, the Chevrolet Camaro teams all stepped up their game, climbing into the first and third spots while several Toyota teams also jumped up, pushing the Chargers back in the field. Unfortunately, things didn’t change much after the second round, so while the DSR Dodge teams were all in the top seven early, they were forced to head into eliminations in seventh, eighth, ninth and eleventh. Ron Capps was the driver in eleventh, so he had a long road ahead of him in his quest for win #1.

Eliminations
The first round of eliminations went well for Don Schumacher Racing, with Ron Capps beating John Force in a Chevy-vs-Dodge rivaly battle while Jack Beckman beat Shawn Langdon. Matt Hagan and Tommy Johnson Jr went head-to-head in the first round, with Johnson getting the win.

Also in the first round, the Chevrolet Camaro funny cars of Courtney Force and Robert Hight advanced, as did the Ford Mustang of Bob Tasca III and the Toyotas of JR Todd and Cruz Pedregon.

In the finals, Tasca had the early lead, but Capps and his Charger drove around the Mustang for the win – giving the former champion his first win of the season and his first win since the 21st event last season.

Championship Standings
Although no Chevrolet Camaro funny cars made it to the finals in Bristol, Courtney Force still holds a healthy lead on the season title run. She leads Jack Beckman by 201 points while teammate Robert Hight is third (220 points back), JR Todd is fourth (243 points back) and Ron Capps is fifth (244 points back).

Denver E Eldridge Sr wrote on June 18, 2018 - 5:43pm Permalink
I remember my first trip to the races at Union Grove in 1969 and the funny cars looking like cars that I recognized like cudas,Novas, Mustangs, etc. Sox and Martin especially comes to mind. I'm just looking at the new or latest funny cars and can't help but wonder, "how to they qualify as Chargers, Camaros or Mustangs". I don't see a hint of any of those cars.